Learning the ropes to keep bells ringing and business booming

with the kind permission of the author, Tina Rowe, and photos by Steve Roberts, Western Daily Press. 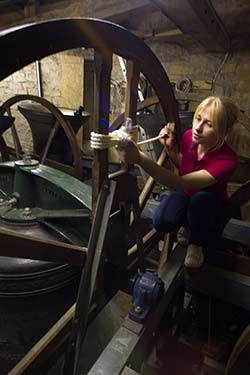 Dreaming of turning your hobby into a career? Western Daily Press reporter Tina Rowe meets Becky Dunnet who did just that after she mastered traditional techniques and founded a firm making church bell ropes

There is no end to the celebrations in which you can play a part when you are the founder of Mendip Ropemakers one of only two companies in the world making church bell ropes.

The sound of “change-ringing” drifting over fields and rooftops is the essence of England. It is very different from the simpler style of church bell ringing found in Europe, and requires special skill.

In the village of Kingsbury Episcopi, near Yeovil, some 17 years ago, it was natural for local children to literally learn the ropes. Becky was among them.

She recalls: “I started church bell ringing when I was 10. There was nothing else to do in the village when I was young, so that’s what kids used to do. There was a big group of us. Then I went off to Southampton University and did a degree in psychology, and after that I was teaching autistic children and was still involved in ringing. I was aware that churches had to wait a long time for new ropes and had to think about replacing them a good way ahead, so I realised there was a niche in the market.

“At that time a friend of mine and I decided to teach ourselves how to do it. I was teaching in the day and discovering how ropes were made in the evenings. I found it fascinating. People found out that we were doing it and started to order ropes. As word got around I felt I had to decide whether it was a hobby or a business.

“I took a risk, quit my job, and established the business and its gone really well in quite a short space of time. I was probably messing around with ropes as early as 2010, and we established as a limited company in 2012.

“There is only one other company in the world that makes church bell ropes, and that is in Loughborough. The ones we make are specifically for English church bells. In Europe they don’t ring bells the same way.”

And so Becky established a “ropewalk” the long workspace needed for winding long strands of hemp or flax into strong, durable ropes that will last for years. At first her business was based at Radstock, because the workspace was available, but now she is based at Isle Brewers on the Somerset Levels, on a little rural business park set among trees.

“It’s lovely little place, and much closer to home,” she says.

Back in Napoleonic times the South West had many ropewalks, and ropes for many a Royal Navy ship were made here. A rare survivor, at West Coker, near Yeovil, has been given a rare Grade II* listing by English Heritage.

In the airy space at Isle Brewers Becky is sometimes aided by her father, Peter. Together they have made ropes for churches and cathedrals across the world.

“All our ropes are handmade using traditional and established techniques,” she says. 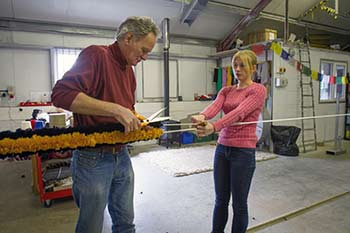 “We always ensure we use the best materials. We have strong relationships with flax and hemp mills in Eastern Europe, ensure our stretched polyester has the minimum stretch, and are skilled in the use of Dyneema, a zero-stretch alternative to polyester.

Flax has become the most widely used natural fibre for church bell ropes. It is hard wearing and soft to handle but its quality can vary according to a wet or dry harvest. Hemp is the traditional material, is superior in quality but a little hard until it softens with use.

Both hemp and flax absorb moisture and stiffen in damp conditions, so pre-stretched polyester rope is often spliced into the top end of a bell rope where it is under most pressure, and where it is most exposed to the weather high up in a tower. Becky is skilled in the procedure.

Bells move full circle during change ringing, the ringer needs great control and the rope has to be comfortable to hold.

The thick woollen grip of a bell rope is known as the “sally”. At Mendip Ropemakers it is made of 100 per cent Marino wool for maximum softness, pre-dyed in Italy and supplied by a firm in Leicester.

“We tried lots of suppliers before we found the right product,” says Becky.

The sally is made on the same principle as the woolly bobble of a hat. Precisely cut strands of wool are fed into the rope as it is wound, held fast and twisted into place. The long caterpillar of colour is then trimmed back to a neat finish with sheep or horse shears.

A sally is traditionally red white and blue, but these days churches ring the changes, if you’ll forgive the expression, with many other colours.

When I call to watch Becky and her father at work they are making ropes with brilliant blue and gold sallies.

“We did a set for Rochester in New York last week and the were purple, lilac and cream,” she says. 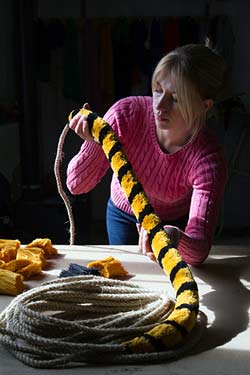 “And we did a set for Miami Cathedral that was blue green and pink. The blue was for the sea, the green for the palm trees and the pink for the flamingos.”

The story of Harare Cathedral’s bell ropes is quite extraordinary. In Zimbabwe, that troubled country the cathedral bell ringers were suspected of being a secret agency simply because their methods were so English.

“It was suspected that their ringing was a secret code, so all the ropes were cut off and the bells couldn’t be rung for years” says Becky. When the authorities finally relented and new ropes could be ordered they were flown out quietly in a diplomatic bag.”

Other countries world-wide which the firm has supplied include South Africa and Canada, all places to which England has exported change ringing.

“The bells are rung in sequence, and learning which one of say eight bells will ring is almost like learning a piece of music,” says Becky. The longest rope that she has ever made was a staggering 96 feet.

“On the whole bell ringers don’t like change and some came to us for a fully natural fibre flax rope and needed it 65 feet long,” she recalls. We hadn’t made one that long before so we decided to make it as long as we could. We had the door open and were out across the road, that’s how we got to 96 feet.

Another unusual order was a huge rope, more than an inch thick, made at the request of a boxer who wanted to pull a tractor round a field.

Bell ringing has brought Becky so much: “It’s nice when you pass a church where you know you have helped in some way,” she says. “The thing about bell ringing is that wherever you are in the world, if you hear bells ringing you can walk up to a tower and you will be welcome.”