With the kind permssion of the author, Roger Button

Ringers who have visited Bath Abbey may have noticed the old Gillett and Johnson tune machine dating from 1888 sitting forlornly in the corner of the ringing chamber behind the seventh and eighth ropes. 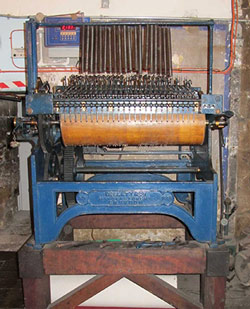 The Abbey’s Tower Tours are a popular visitor attraction and the Tour Guides would point out this ingenious piece of Victorian engineering, no longer in use. It was replaced about 25 years ago by an all—electric system, which ironically is out of action awaiting repairs!

Ringing at the Abbey I had long thought that it would be an interesting project to get the machine working again so that it could be demonstrated to visitors.

When it was in use the machine played a single tune three times at 9:00, 13:00, 17:00 and 21 :00 with a different tune for each day of the week. It was originally weight—driven. Winding the weight, twice a week, was contracted out to a local clockmaker and jeweller’s firm, Messrs. Mallory, who are still trading a hundred yards or so north of the Abbey. It had been converted to electric drive by Wm. Potts of Leeds in the 1950’s and the electrics, although disconnected, appeared to be in place.

Several ringers had examined it and realised that there were some broken parts in the hammer raising mechanism, but had no idea whether the machine was generally serviceable or not.

The first task was to see whether the machine would still turn and somewhat to my surprise, on reconnecting the motor and its mercury switch, away it went, with an enormous clatter. My first thoughts were to suspend a set of ‘tubular bells’ above the machine with hammers operated by the mechanical system.

Communication with Messrs. Gillett and Johnson, now relocated in Bletchingley, resulted in a visit from one of their engineers. He was able to explain the operation of the machine and pointed out that the noise level during operation is such that visitors would hardly be able to hear the bells! He recommended enclosing it in a glazed box to cut down the sound. This would have partly defeated the objective because the whole attraction of the machine was to be able to get up close and watch it in operation. Health and safety issues were raised, such as the risk of small visitors poking their fingers into the moving machinery.

The project advanced with the gift of some handbells. These had originally belonged to Quex Park and were kindly donated by Dawn Offen. I thought that the handbells themselves would be of interest to visitors - although not so easy to arrange for ringing by the machine.

The handbells are mounted on a wooden frame, with clappers removed and mounted upside- down below them. They are pulled by the solenoids to strike the bells in the correct position and at the correct angle. This was surprisingly straightforward, after some experimenting to find the best size solenoid and voltage to use. 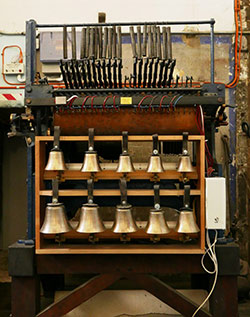 The microswitches are mounted on a length of steel angle that conveniently fits under bolts that hold the cast iron frame of the machine together. The most difficult part of the project was getting the switches in the right position relative to the triggers. The triggers vary slightly in shape, the distance they move varies because the length of the pins varies and there is very little tolerance in the movement of the switch mechanism. However, most of the notes now play most of the time. The advantage of the tunes sounding a little ragged is that visitors can understand why the machine was pensioned off.

Standard Gillett and Johnson practice is to have two hammers on each bell, so that notes can be repeated more quickly than would be possible with a single hammer. Unfortunately, no one could be confident which pin on the barrel was connected to which bell. The consensus was that it was most likely that, facing the machine, the treble was on the right and that the triggers were in pairs, i.e. 1,1 2,2 etc. I installed the wiring on this basis, and was relieved to find that the first time it ran a ragged tune emerged. After some adjustment to the switch positions and straightening of pins most tunes are recognizable.

To allay health and safety fears the machine only operates when the Tour Guide keeps a push- button depressed, with strict instructions to release the button should any inquisitive visitors be tempted to come too close.

The handbells are based on a set by Robert Wells, of Aldbourne, and must have been made between 1760 and 1790, so they are similar in age to the two trebles of the tower bells, a nice historical touch. Tony Crabtree of Shrivenham swapped one bell to make a more tuneful set. The tune barrel mechanism appears to be in good working order, not bad for 125 years, apart from the odd missing pin. The same tune is played twelve times before the barrel shifts along automatically to play the next one. At the end of the ‘week’ there is a satisfying ‘clunk’ as the barrel slides back to Sunday’s position ready to play ‘Jesus Christ is risen today’ almost note perfect. While it plays there is a gentle rhythmic rattle from the hammer raising mechanism in the background.

The Abbey authorities appreciate that the machine can now be demonstrated, and the Tower Tour Guides were delighted to be able to show it off to their visitors on the special tours while last years’ Christmas Market was in full swing around the Abbey.