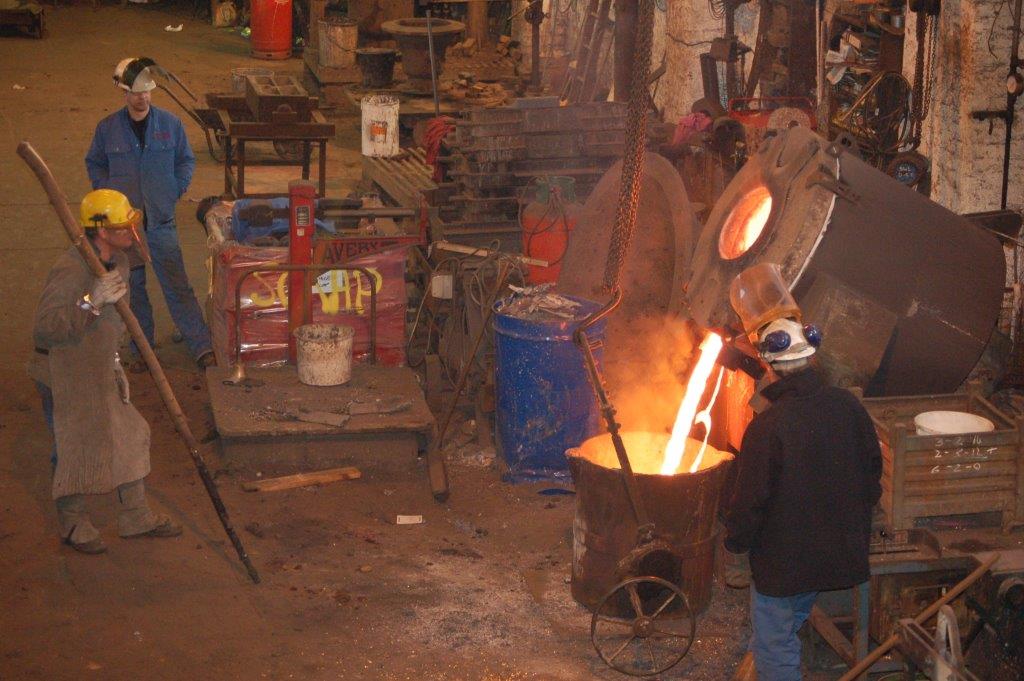 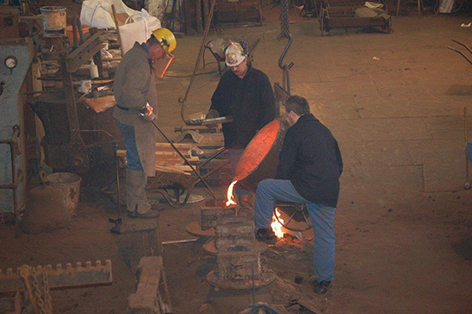 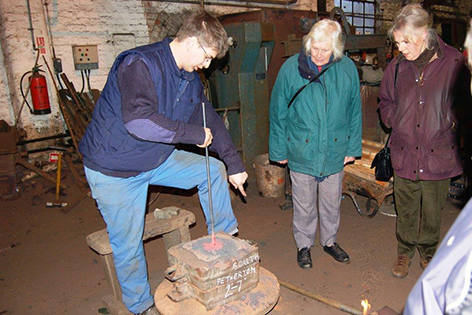 This series of photos show the Flat 6th for South Petherton being cast at Taylors of Loughborough.

The manner in which church bells are manufactured in England has changed very little over the last thousand years.

To cast a bell, molten bell metal is poured into a mould, which is made in two parts: an inner mould, or 'core', and an outer mould, known as the 'cope'. The moulds are made out of a traditional moulding loam consisting mainly of a mixture of clay, cow dung and horse hair.The ingredients are carefully mixed together to form a homogenous and fairly stiff 'mud pie' which can be built up into the required shape. The 'core', or inner mould, is built up in layers on a metal base plate and contoured to the bell's profile using a metal plate, known as a 'strickle', shaped to the required profile of the bell. Each layer of the moulding loam is slapped on top of the previous layer and carefully smoothed in, ensuring that no air pockets are left in the finished article - they could expand and burst the mould when the hot metal is poured into it. The strickle is revolved around the mould, paring off excess loam and shaping it to the required profile. Once a number of layers of loam have been applied, the mould is placed in a drying oven to bake hard. It is vital that no moisture remains in the moulding material at the time of casting.

The 'cope', or outer mould, is built up inside an iron case, resembling the shape of a bell. The many holes allow loam to exude through them and thus 'key' the moulding material into the cope. As with the core, moulding loam is built up on the inside of the cope to form the shape required. The mould is placed in the drying oven at regular intervals. The strickle, which has now been inverted, is once again used to remove surplus loam and form the required shape.In order to achieve a fine, smooth finish to the moulds, the final layer of loam is applied as a wet slurry. Before the final layer of moulding material has been baked hard, the mould is coated in graphite (this prevents the molten metal from burning the moulding loam) and any inscription or decoration is stamped into the mould in reverse. These indentations provide a reversed relief inscription on the finished bell.

Once both moulds are thoroughly dry and hard, the cope is inverted (thus the necessity for the holes for the loam to key to!) and carefully lowered over the core. It is important that the bell founder ensures the cope sits absolutely centrally over the core to ensure that the bell is of concentric shape - any variation in thickness from one side of the bell to another will spoil the tone of the finished product.

The bell metal, an alloy of about 77 % and 23% tin is melted in a furnace to about 1200 degrees When the metal has reached this temperature it is poured into a "ladle". A willow branch is placed in the metal. This is the 'poling' process that de-gases the molten mix.The metal is poured into a hole at the top of the mould and gases formed are allowed to escape through a further hole. Cooling is carefully controlled to prevent stresses within the metal which could lead to future cracking. Large bells can require up to a week to cool. 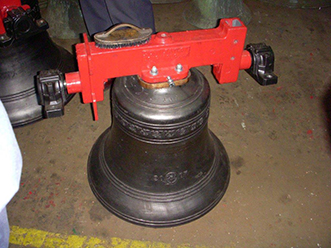