When Call Changes are mentioned I automatically think of Devon.  If you’ve never heard a good Devonshire team going through their “Sixty on Thirds” you’ve missed an experience.  Ideally you should find out where and when they are holding their Finals and make an effort to get there. 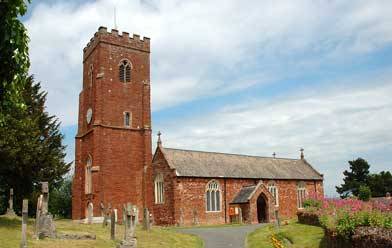 Exminster Church - Click the picture to hear the bells

Many years ago I was so disenchanted with the standard of raising and lowering in the Ilchester Branch that I thought I would let people know how it should be done, so looking in my Ringer’s Diary I found the name and address of the Devon Association Secretary, Brian Drake. Now what better name could you have for a Devonshire man than that, I was heartened immediately and rang him up. “Mr. Drake,” I said, “Could you possibly bring a band of ringers to Somerset and show us the way you raise and lower your bells?”“Love to M’dear.  I’ll ring ‘ee back.”  He did ring me back in a couple of days and said, “I’ve ‘ad a word with the “Social Ringers”, they da go out once a month and ring a peal ‘n ‘ave a meal after. Is there anywhere they c’n ‘ave a meal?”
I assured him that there was and arranged for Hardington to be the venue and the Mandeville Arms for the meal.  They came on a beautiful Saturday in June and were a pleasure to listen to, while the audience lay around on the grass, awe struck.  Then we had a go.  Didn’t they shout?!!

There were three generations of the Adams family there, Frank (locally known as Stormy), Colin and Scott.  Listening to the rise on the eight, Frank said to me, “When they’m goin’ right boy, you can march to ‘em.”  And he was right!

I became great friends with Colin and later his brother Mike and go down occasionally to Exminster or Kenton to ring with them for the sheer joy of ringing with a band who’s sole aim is accurate striking. I can assure you that one clip or hesitation stands out like a dandelion on a Bowling Green.  The only problem I have is with the language, I don’t always understand what they are shouting about and it’s most embarrassing to find they are shouting at me.  Then I have to think what “Work yer Sally” might mean.  Closer at Handstroke I gather.

Anyway, I don’t think this is what the Editor had in mind when she asked me to write something about Call Changes.  So what are Call Changes?  You follow the same bell until you are told to follow someone else or someone else is told to follow you.  If you are told to follow a different bell, that is easy, you just hold your bell up fractionally for one blow at the next Hand Stroke and follow the bell as instructed.  Now what happens if someone else is told to follow you?  This is not so easy, unless you have noticed who the bell you are following is following.  Clear?  If you are ringing the fourth and are following the third, notice who he is ringing after, if it is the second, and the call is “three to four”, then you follow the second, but to get there you have to “Cut down” or “Check” your bell for one blow only on the next Hand Stroke to get under the bell that is coming up over you.  The most common method of calling is to call the bells “Up”, that is to call a bell to follow the one that was following him.  Some places they call them “Down”, To bring you down in front of the bell you are following, where watching who the bell you are following is following is essential.  When you get someone calling both up and down in the same peal it is very  confusing .
By the way, there is no open Handstroke lead in Devon Call Changes.  They “Cartwheel” them so that there is the same space between all the bells all the time.  Try it!

If you are ringing Call Changes, perhaps as a stepping stone to Method Ringing, don't just flop about and put your bell roughy in the right place, try to see how accurately you can place it and try to get it in exactly the right place.

In the pages that follow you will find different explanations of how to ring and call Call Changs.