A Crack in the Tower

We found a crack in our bell tower.

It started with my being elected steeple keeper at All Saints Wrington. Our tower captain, Teresa Dunstone encouraged me to attend the course for steeple keepers that was put on at Yatton church. I went along and returned back with a huge amount of advice and a list of things to check. It was difficult to see in the All Saints bell chamber as there was only a single electric light bulb, so I took up a floodlight to take a close look at the bells and the condition of the tower.

Although my predecessors had done a good maintenance job on the bells, it was clear that the bell frame was rusty. I then checked the walls, to find major cracks in the masonry, where I had been told to look – where reinforcing RSJ’s had been buried in the walls over the lancets. On the windward, and therefore damp, side of the tower they had rusted badly, pushing the masonry apart, producing cracks that were up to three foot long.

Once I had persuaded my fellow band members that we had a problem, and that we had to report it, the dreaded day arrived when a structural engineer arrived to take a look. We were told we had to stop ringing, as the stresses caused by the swinging of the bells risked enlarging the cracks. We persuaded the engineer that we should reduce the amount of ringing instead, and weekly monitor the development of the cracks, using an electronic Demec gauge that only cost us a few pounds. That would then tell us if the crack propagation was speeding up. Only in that case would it be necessary for us to stop.

We knew that we had to get the cracks fixed eventually (as they were so big), if the tower bells were not to fall silent. There was also a long list of other items needing attention, including the big clock case with its supporting beams that compromised the ringing of four of the bells, and it would be best if we could get all of the work we needed done in one lot. We persuaded the PCC and a fund raising programme was launched, aiming to raise the £80,000 that our contractors told us all of the works would cost.

Our fund raising was successful. We gained diocesan approval (faculty) in record time, and the work commenced on 5th January. The works took six months in total. Six contractors worked in sequence. Structural repairs and removal of the old clock, re-wiring, overhauling the bells and frame,new louvres, installing the new clock and heating in the ringing chamber. Tower members shared in the work, providing accommodation for bell hangers, labour with dismantling the bells and fittings, scraping and painting etc. For which, many thanks.

On Sunday 6th November of the same year we celebrated the outcome of the work, and the augmentation of the bells from six to ten that had taken place a century before. At the service we had a bishop bless each bell, with the bell being described sounding in response; everything from our mediaeval Sanctus bell, through Bilbie bells of the eighteenth century to the Whitechapel bells of 1911.

If you find cracks in the inside walls of your ringing chamber, in all good conscience you are obliged to do something about it. If caused by the ringing of the bells, or rusting bell frame ends expanding, or whatever, we have the responsibility to look after the historic buildings in which they hang.

First try to work out if the crack is new or not. If it is new you need to stop ringing immediately! Old cracks usually have dust in them. Sticky tape slid in and back out of them helps verify this. With new cracks the stone surface inside will look a brighter colour than the old exposed surfaces.

Old cracks have often developed to a particular length, relieving the stresses that caused them to develop, and get no longer. Others develop and continue developing at different rates. If these rates are extremely slow they are not a problem. If the rate of crack propagation speeds up, then you do have a problem. There are structural engineers “rules of thumb” for this. As our structural engineer was worried about the lengths of our cracks, we were asked to measure the cracks after each major application of stress, and/or at weekly intervals with service ringing in between. To reduce the possibility of the cracks growing quicker and to keep our practice and service ringing we agreed to stop quarter peal ringing until we had a long-term record of what was happening to the cracks. If the cracks got wider by five hundredths of a millimetre or progressively by a series of three, two hundredths increases in width then we had to stop ringing and call for help.

How to measure a crack to this level of accuracy? We used quick setting epoxy glue to fix little Demec gauge disks each side of the cracks we were monitoring. We bought an electronic Vernier caliper from an electronics store – Maplin sold us one for £15. This can measure to anaccuracy of one hundredth of a millimeter. We then drew up a table to write in our measurements and did the readings as above. The Vernier caliper’s points fit into the holes in the centre of each Demec disk, giving measuring points. (Demec disks can be bought on line at little cost. If you only want a few they are harder to get – I can let you have a pack of ten from my stock if you get in touch with me.) Each measurement we had to do twice, and record an average of the two readings, to help iron out inconsistencies of measuring techniques. Every six months we sent our measurements by email to our structural engineers, who were (like us) duly reassured.

If after measuring weekly for six months you see no measurable increase in crack width, it is possible to increase the time gap between measurements, for example to once a month and following quarter peals when extra stress will have been applied to the tower walls. In this way you are still keeping an eye on the problem and relieving yourself of the need to worry. Steeple keepers have told me in confidence how they have been worrying about cracks in their towers for years. The real problem is them not knowing if the cracks are stable or not, and not knowing that if they report the problem, whether they will be forced to stop ringing. 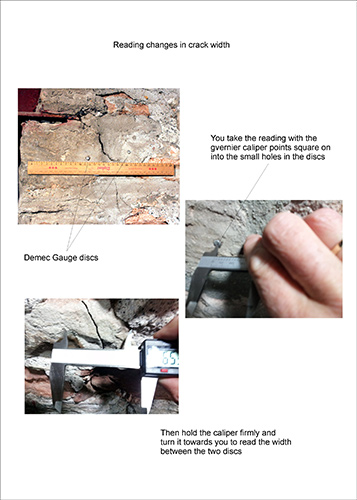 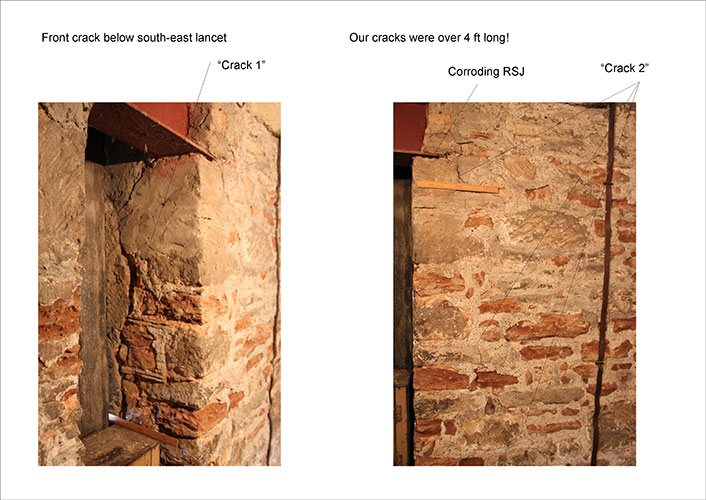 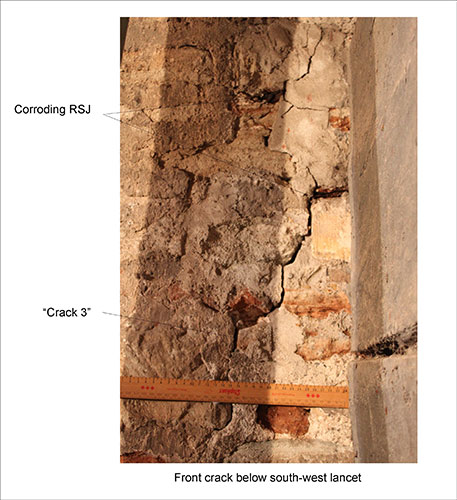