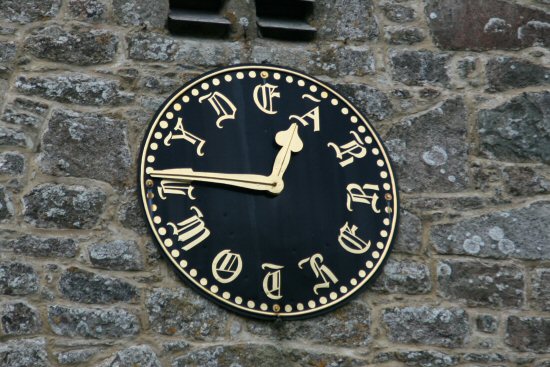 Buckland in the Moor

We all come into contact with church clocks very frequently, but on the whole we tend to ignore them.  In fact, we are in the fortunate position of being able to see clocks that the general public don’t get to see, and some of them are very interesting.  In fact some of those that we come into contact with each week are over three hundred years old!
This is an excerpt from “Bilbie and the Chew Valley Clockmakers”, reproduced by kind permission of the authors, Roy Rice, James Moore, and Ernest Hucker.  It tells why the first church clocks were installed, and the book goes on to give a very clear description of how they worked.   (The book is available through your local library.)

In the middle of the sixteenth century there were very few clocks for use in the home.  However, church clocks were not uncommon.

Many of our churches have a history going back over six or seven hundred years.  After a church was built, it was the practice to install a bell as soon as possible, which could be used to summon the parishioners to the services, add to the solemnity of funerals, and also toll the curfew at dawn and dusk.  It was either rung by the sexton or an official bellringer who was paid between five shillings (25 pence) and a pound a year for his work.  Human nature being what it is, sometimes he overslept, or was ill, or got drunk, and the bell was not rung on time.  Eventually when a mechanical method of ringing the bell was discovered, people in the wealthier towns and villages wanted to make use of it.  Employers could more easily fix the start and end of the working day.  For the first time all the inhabitants would have the same reference to the time of day, as everyone would hear the hours strike.  As clocks were expensive to make, it was also a matter of local prestige and pride to have one.  An early church clock did not look like the clocks of today. It was just a collection of gear wheels mounted in an iron frame, and was simply designed to raise a hammer to strike the hours on a church bell.  It was made of iron, had no dials, and the frame was about the size of a large chest of drawers. Power was supplied by a weight on a rope which was wound round the axle of a driving wheel mounted in the clock frame. 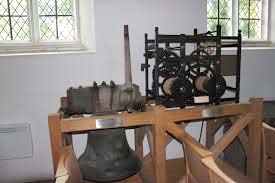 The principle was simple.  There were two elements to the clock.  The first mechanism was made to trigger the second at regular intervals of one hour.  The second was designed to strike the bell in a sequence of one to twelve strokes as it was triggered off by the first.  These two elements were called “the going train” and “the strike train” as they each consisted of a system of gear wheels linked into a “train”.

In practice making the clock was very complicated and required considerable metalworking and design skills, bearing in mind the technology of the times.  The principle remained the same for clockmakers for the next three hundred years.  Clocks acquired dials and hands, they were made to strike the quarter hours, the count wheel was replaced by a better system, the development of spring steel enabled weights to be replaced as a power source, improved materials and tools made the manufacture of smaller and more delicate movements possible, but at the heart of every clock there was always the going train and a separate strike train.