The minutes of a 1927 Axbridge Branch meeting, proving that even Branch Secretaries are human! 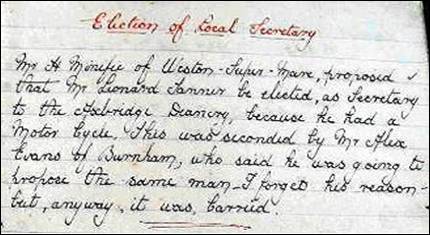 This interesting board is in the belfry at Maiden Newton, Dorset. Photo by Jono Chapman

This beautiful board can be seen at St Merryn, Cornwall.  Photo by Ian Sharam 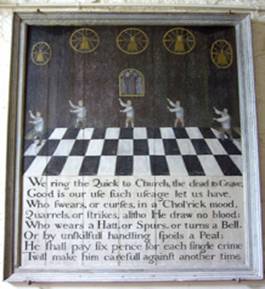 “We ring the quick to church, the dead to grave.  Good is our use, such useage let us have.  Who swears, or curses,in a Chol’rick mood, quarrels or strikes, although he draw no blood, who wears a hatt, or spurs, or turns a bell or by unskilful handling spoils a peal:  He shall pay six pence for each single crime  T’will make him careful against another time.”

This lovely board is from Fowey, Cornwall.  Photo by Gordon Rendell 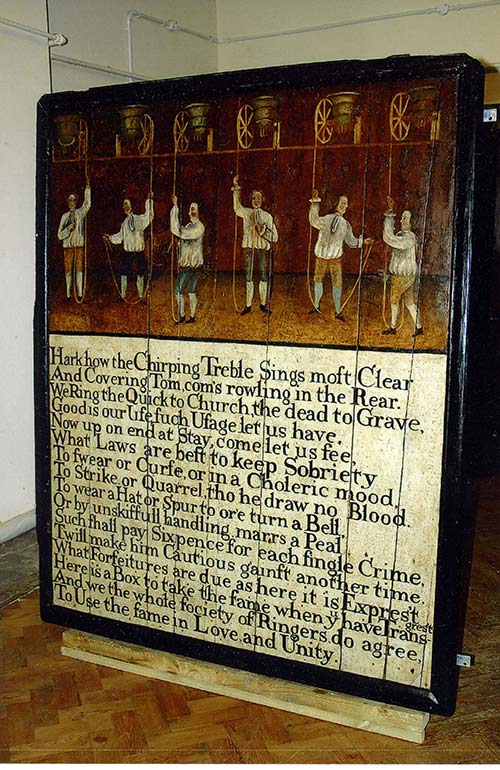 “Hark how the chirping Treble sings most clear
And covering Tom coms rowling in the rear.
We ring the quick to church, the dead to grave.
Good is our life such usage let us have.
Now up on end at stay, come let us see
What laws are best to keep sobriety
To swear or curse or in a choleric mood
To strike or quarrel, tho he draw no blood,
To wear a hat or spur, to o’re turn a bell
Or by unskilful handling marrs a peal,
Such shall pay sixpence for each single crime.
T’will make him more cautious gainst another time.
What forfeitures are due as here it is expres’t
Here is a box to take the same when yu have transgres’t,
And we the whole society of ringers do agree,
To use the same in love and unity.

This slightly intimidating fellow is at East Chinnock, Somerset. Photo by Mark Harris 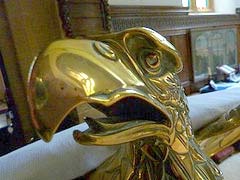 Here are some of the ancient benchends at Bishop’s Lydeard, Somerset. Photos by Mark Harris 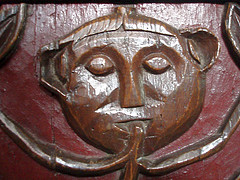 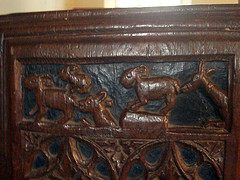 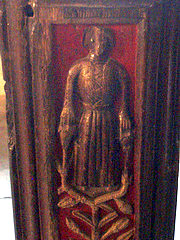 A statue of St Martin of Tours, to whom the church is dedicated. St Martin is the patron saint of soldiers, and the legend  goes that on a bitterly cold night  he cut his cloak in half and gave the other half to a beggar who would otherwise have died of the cold. It would have been a pretty warm coat, because he was a tribune, which was a a very senior rank, so although the beggar must have been very warm as a result, St Martin must have had a chilly night! 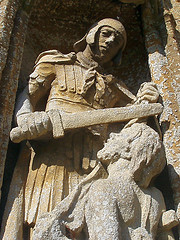 The prize money must have been very good for that period!!! The 1st prize is the equivalent of £430 today. 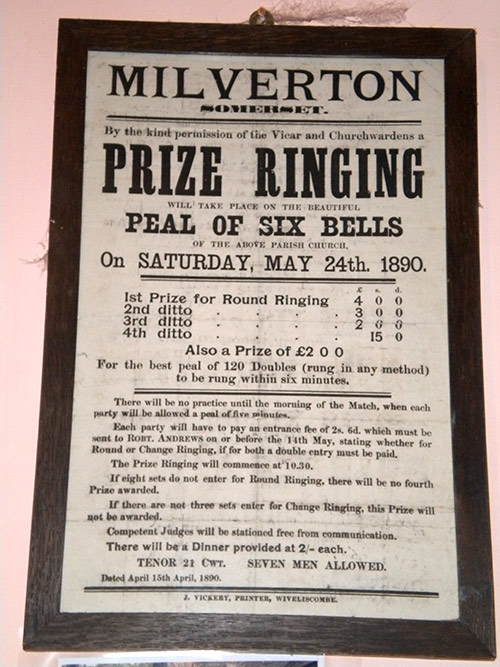 The Amazing Corbels at Limington

As ringers, we are sometimes privileged to see close up things that others can only see from afar.  These extraordinary corbels sit either side of the Ringers’ balcony at Limington.  Sadly, hardly anything is known about them.  A description of them, done recently by NADFAS says that, ‘The South corbel is in the form of a grotesque face with tongue stuck out, and hands holding it’s ankles. The North corbel is in the form of a plain face with arms going below the face to hold a child's face, or skull immediately below the chin. T 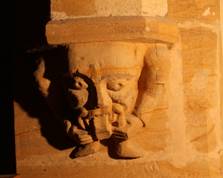 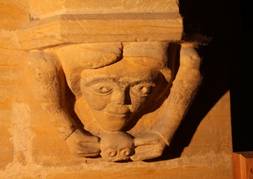 These are formed from Hamstone and probably date form 14th C.'

This information was supplied by Peter Bartin, and the photos were taken by Gordon Rendell.

BUT if you look closely at the photos of the Limington corbels you will notice that whoever did the appraisal of them for NADFAS couldn't have studied them very closely. They are of a husband and wife consuming a baby, possibly their own.  The old chap on the south side is eating the lower half and his wife the top half. If you look at the feet depicted, they are facing the old chap, so they couldn't possibly have been his own. I wonder if it depicts an actual local event and was put there as a permanent mark of shame on the perpetrators of a case of infanticide.  Gordon Rendell 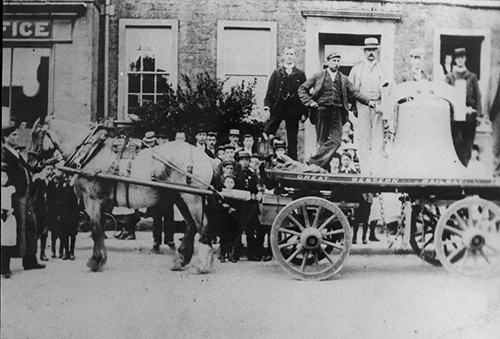 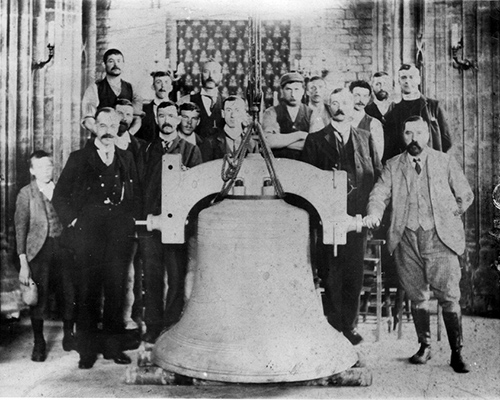 In 1902, the six bells at Ilminster  were given a major overhaul.

The 5th was melted down and recast by Taylors, and a new  eight bell frame was installed. The new bell can be seen here arriving outside the Minster Church.  One wonders how they managed to lift it off the wagon!

In the second picture the bell is in the base of the tower, ready to be hauled up.

A few years later, in 1907, Taylors cast two Trebles to complete  the octave.  Thus the bell in the photos became the 7th of the present ring. 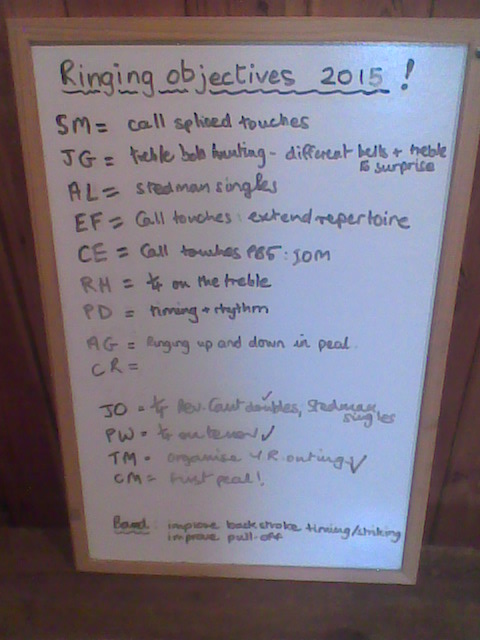 The ringers at Carhampton, in Somerset, are not going to be allowed to forget their New Year's Resolutions! 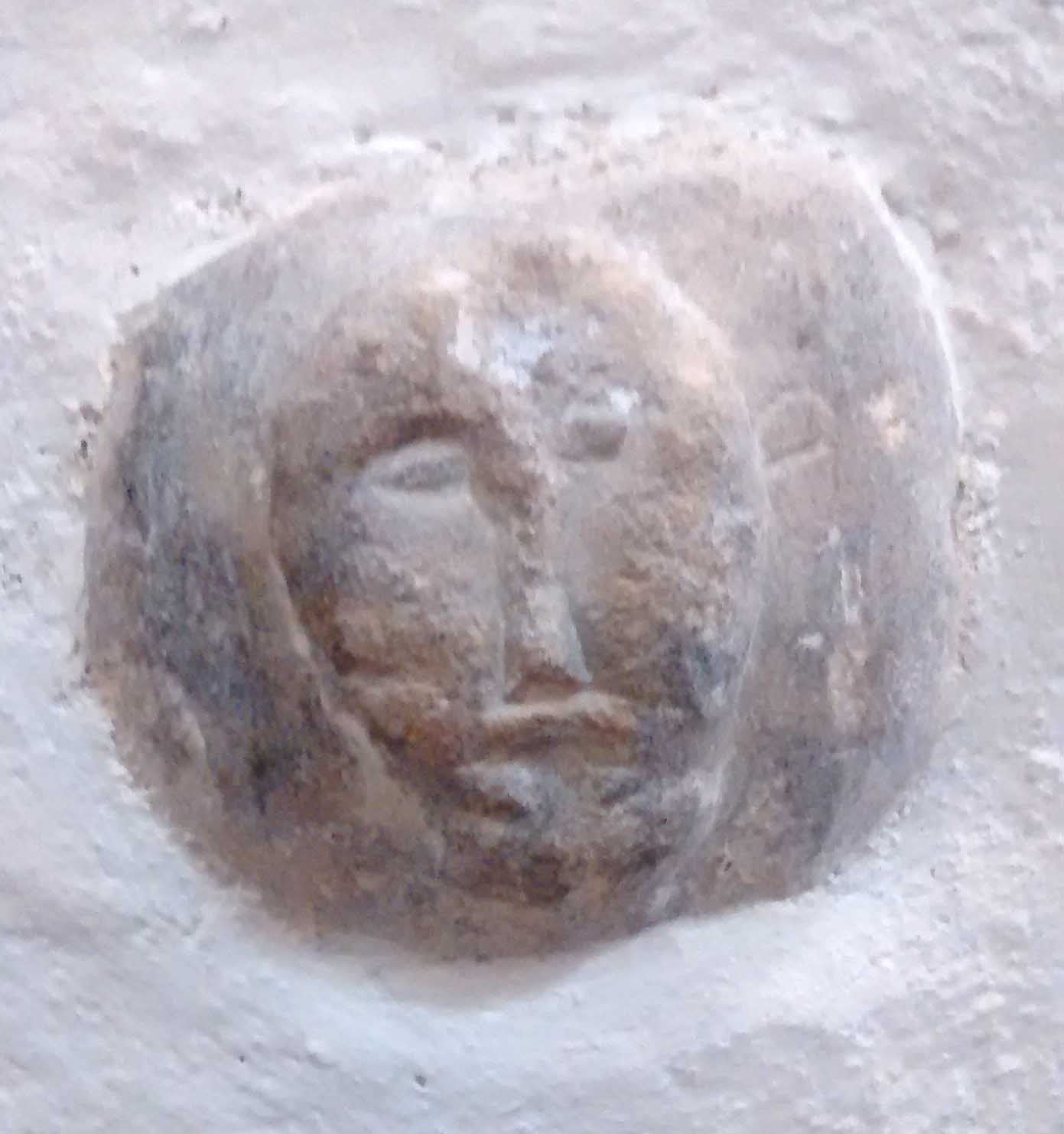 This funny little fellow sits quietly and watches the ringers at Maperton, near Wincanton, Somerset! 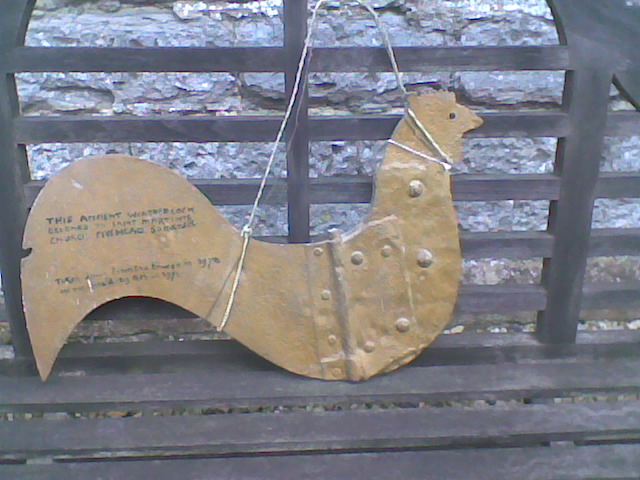 Fivehead, on the Somerset Levels, has a fascinating ancient weathercock in the belfry. 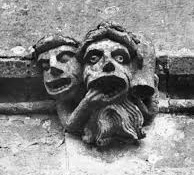 Monksilver Church in Somerset has some amazing carvings.

The one opposite is thought locally to feature King Edward 1 (King Edward the Confessor), who is believed to have commissioned the building of the church.

Poor King Edward was known for having rotten teeth. As the stonemasons were badly paid, this was their way of mocking their paymaster for their low wages.

We are grateful to the Landlord of The Notley Arms who provided this information after our excellent lunch there. 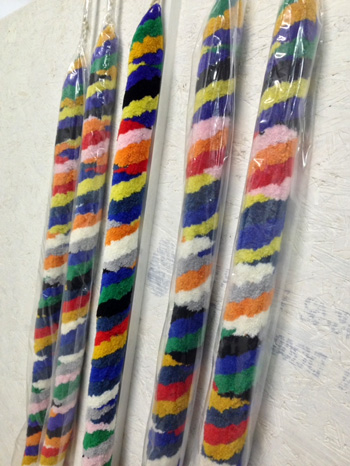 The bells at Stanway have been tuned and rehung, and augmented to five. They were rededicated on June 21st, 2015. The ringers asked Mendip Ropes for "multi coloured sallies" for their new ropes! Becky was happy to oblige and created these rather unusual ropes.

This was not Becky's first departure from the traditional colours. A few years ago, the ringers at Ash, in Somerset, were discussing colours and one elderly ringer suggested pink! Soon afterwards he died, and if you look carefully at the Tenor rope you will find a small flash of pink which was put in in his memory!

John Coleman, of Cattistock, Dorset, (otherwise known as Icon John) has kindly sent us some of his ringing cartoons.

The last cartoon here was inspired when a stay was broken at Cattistock. The Captain sent John a text asking if he could get a replacement . He sent the dimensions in centimetres. John forwarded the message to the carpenter, who assumed that the measurements were in inches! Consequently, when the new stay arrived, it was rather larger than expected!!

The Chardstock Ringers on their Outing, around 1959. 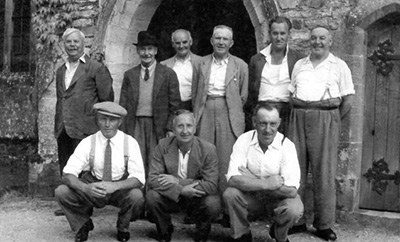 Can anyone identify the tower where this was taken please? The current band are interested to know where it was, so if you know please send us a message through our Contact page and I’ll pass the message on.