by Tom Harris of Staplegrove, Somerset 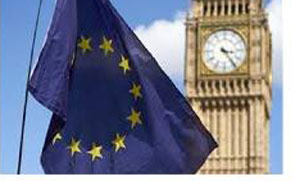 Now that the result of the EU Referendum, for which we have all been waiting for what seems like an eternity Is known, there comes the time of evaluation as to what it means for ringing in this country and the implications for the future of the exercise. Newsletter has had sight of the new European Common Ringing Policy, soon to be introduced across all 27 of the remaining EU nations. We appear to have had a narrow escape.

Several name and organisational changes would have come into force almost immediately. First and foremost, the CCCBR, in accordance with its move from the UK to Strasbourg next year, would have become known as the European Council For The Ringing Of Bells (EUCOFTROB). This will bring it into line with the statutes of the Common Ringing Policy to be outlined in the President’s speech in the EU Parliament soon. All 27 nations will be represented on the main body of the Council, with one member from each EU country also on each of the sub-committees for each of the main groups of bells. The Council will include member nation representatives on each of the sub-committees for not only church bells, but all secular bells, including any and all tower bells, temple bells, garage bells, min-ring bells, hand bells, farm bells, cow bells, bicycle bells, door bells, tubular bells, Morris dancing bells, rattles where bells are included, historical bells, grade I and II listed bells, ceramic bells, glass bells and hell’s bells.

The terminology within ringing is to be standardised across Europe in line with the 2013/14 Directive I-ix/1260-5040. All ringing achievements will be preceded by the prefix ‘Euro’. Thus, we would have been required to accept and get used to the concept of the ‘EuroPeal’ and ‘EuroQuarter.’ The terms ‘Bob,’ ‘Single” and ‘Change’ are to be removed as being too insular, similar and reminiscent of ‘exit.’ Instead, the words ‘Integrate’ for bob, ‘Union’ for single and ‘Assembly’ for change will be mandatory from January 1st 2017, in order to give a reasonable assimilation and lead-in period.

All Churches will be required to register their bells with EUCOFTROB by the end of 2016. Details of the registration process can be found on the website and from where the relevant multilingual application forms can be downloaded. From that point on, no alterations may be made to bells or associated apparatus, which includes ropes, without notification and application by your Diocese and prior agreement from EUCOFTROB.

Next, the European Commission has resolved to implement a quota system from 2018 for the ringing of church bells. This will require no Church to permit the striking of any bell more than 25,000 times in the course of any calendar year on year. This new EU-wide Directive gives much greater flexibility than previous regulations in that any permutation of service, practice, euro-peal or euro-quarter peal ringing is allowed up to the maximum striking euro-quota per annum for that bell, rather than the previous discredited CTS or Church Total System of 50,000 strikes per annum, which penalised those institutions with a larger number of bells. Any Church that exceeds the new quota will be subject to disciplinary proceedings and will remain silent until the conclusion and findings of such proceedings by the European Court of Ringing Rights.

In accordance with the SchengenRing Agreement there will be unrestricted movement of ringers within the EU, but, since the UK will now remain outside this Agreement, no UK ringer is permitted to ring elsewhere than within the UK, but new negotiations are now proceeding apace for reciprocal arrangements with the USA although “at the back of the queue,” according to the well known Peal ringer B Obama, and other commonwealth countries as listed in what would have been, Euro-Dove. Tom Harris

PS.  Somebody I know read all this and thought it was serious!!  H.