This article was published in the Ringing World (December 9th, page 1231), and is reprinted here with the kind permission of Peter Dale and The Ringing World.

This article is addressed to those instructors who are trying to establish change ringing at towers where there is little or no experience base.

The first suggestion is that you encourage your ringers to pay close attention to their bell handling styles, and that you invest plenty of practice time in polishing up the Rounds.  Try to get the band to pull off in Rounds as well as they can.  Pulling off in rounds and then setting is a good warm–up exercise, and can be turned into a game by scoring failures to set first time.  Insist of the initial rounds being as respectable as possible, allowing for the limitations of your band.  Show your ringers this article and involve then in constructive criticism of the striking. 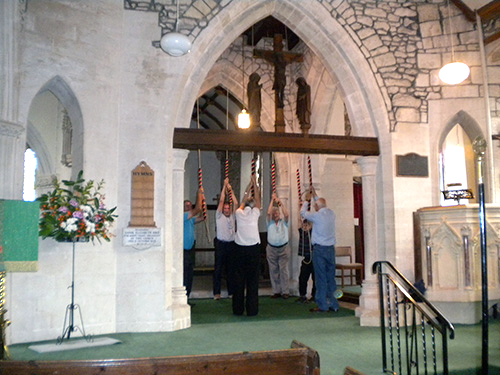 Let us now assume that your band can ring rounds to a steady metronome beat, and that you have corrected any serious handling errors.

It does not benefit a learner if you skip over the basics in an attempt to avoid boredom.  You will be setting your ringers tasks for which they lack the fundamental skills, so success is highly unlikely at the first, second or umpteenth attempt.  They may reach a fair standard of mediocrity eventually, but they are more likely to become frustrated by a sense of failure and give up.  Such a pity when there is a wide variety of elementary techniques to retain a learner’s interest.

So what is the next step from ringing rounds?  Call changes?  Not really, even though they are universally recognised as being the next stage, they won’t help your ringers just yet.  Your band is still walking a tightrope as it manages to ring rounds tolerably well, so the slightest distraction can set the whole thing wobbling.

Learners have difficulty with call changes.  There is no question about that, because if they didn’t then they would not make such a hash of them.  In fact, it seems to be accepted at many towers that at least two or three ragged whole pulls are inevitable before the beat settles down after each change. It should not be like that:  you are aiming to make changes cleanly at the next handstroke after the call, without clipping or hesitation.  This doesn’t come intuitively but involves skills that must be taught.

When your star learner can ring rounds competently on any bell up to their comfortable weight limit, try this simple step.    Supposing they are ringing the 3rd; call the 3rd into 2nd’s place and then back into rounds again.  Repeat this until the 3rd swaps cleanly with the 2nd.  Don’t spring it upon them suddenly though,; make sure that they are absolutely clear about what they will need to do beforehand.

You should explain that:

Similarly, they should know in advance what they must do to return to rounds.  Explain the technique involved in delaying the handstroke by one beat.

You may prefer to treat the two movements as separate exercises.  Simply stand each time and practice only the “down” movement first.  Both movements can be mastered quite quickly, especially if you can place reliable ringers on the 2nd and 4th.

This is only a simple step, but a fundamental one, and the learner will have a better chance of hearing their bell than they would in full blown call changes.  Do not compromise on striking but persevere till the changes are made faultlessly; only then can you let them know that you are satisfied with the result.  Never give praise if it isn’t deserved, however.  Saying “Well done” indiscriminately patronises a learner and robs them of the feel-good factor when they really do get it right!

Consider also the role of the 4th in this exercise, remembering the advice: Look at all the bells whose sallies rise and fall before yours.  Providing you insist that your ringers do this from the outset, then surely the 4th is in a position to catch the early glimmerings of rope- sight?

Of course, this exercise can be adapted to involve different pairs of bells, and eventually it will lead on to call changes.