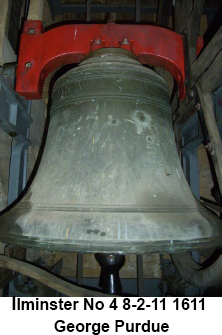 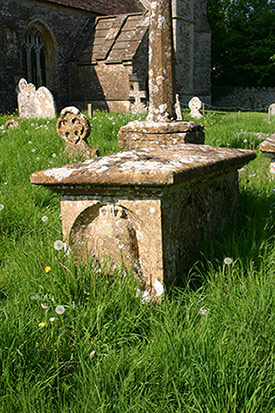 The Purdue grave at Closworth

It seems hard to believe now.  Closworth, the village two miles across the fields as the crow flies from the Dorset border, used to be the centre of a bell-founding empire controlled by, a local family, the Purdues.  The story begins with William Purdue, active in the latter part of the sixteenth century.  Of his four sons, William remained at Closworth, George worked at Taunton, Richard at Glastonbury and Roger at Bristol.  Thomas, a later member of the family, continued at Closworth until his death in 1711.  They dominated the trade in Somerset for more than a hundred years.

How did they achieve this?  It was long   before the Industrial Revolution, with no railways or canals, or even decent roads.  Communications were in an equally primitive state.  Well, perhaps we underestimate our forefathers.  Founding was well understood, long before the Purdues.  With transport and communication, the secret, then as now, was to make the best use of the means available - something we might ponder today, with all our sophistication.  For instance, it was common practice for the founder to travel to the location, and cast there.  All that had to be taken was tools and equipment.  Metal generally was provided by the customer, in the form of old bells to be recast or replaced.  However, the tantalizing fact is that very little is known with regard to the details of the business beyond notes of negotiations in churchwardens’ books.

Just occasionally, a more complete picture appears.  In 1675, the Dean and Chapter of Exeter Cathedral had four cracked bells on their hands, and it was to Thomas Purdue that the work of recasting was entrusted.  So, Thomas went to Exeter, setting up house in the Deanery garden, building a furnace and digging the casting pit.  The bells were recast, and three out of four survive, “Cobthorne” (9th of the present ring), Stafford (11th) and “Great Peter”.  All are fine bells by anyone’s standards.  But the Dean and Chapter had doubts.  When “Cobthorne” was cast, the metal had run out.  It must have been a heart stopping moment for Thomas.  Would the casting be a failure? In fact, the bell came out of the mould whole and sound but lacking canons and argent – that was all, but it was the cause of grave concern.  An agreement was drafted for Thomas to sign, to the effect that “insoemuch as the said Cobthorne bell cannot be hung up by canons or tenons or argent thereof, as the same was formerly, and still ought to bee hung, and as other bells are usually hung”, the guarantee period would be twenty years, rather than the usual year and a day.  The bell remains sound after more than three centuries.

Thomas died aged 90, and at his death bellfounding at Closworth ceased.  The family turned to other occupations.  Although proud local memories remain, practically all trace of the foundry has disappeared.  But plenty of Purdue bells survive.  In Somerset the mighty tenor at Queen Camel is at the head of a formidable list.  Examples are to be found as far away as Dublin.  These are living memorials in our time, and long may they ring out.

(Details of the Purdue family are taken from the summary in  “Church Bells of the Frome Deanery” by George W Massey.  The Exeter story is told in “Thomas Purdue Fecit” by the Revd JGM Scott, on the front page of The Ringing World dated 21February 1964, later incorporated in his booklet “Exeter Cathedral Bells”.  Both are in the Association Library. )