The Learning Curve - A regular feature in The Ringing World, by John Harrison.

Ringing tutors see two problems over and over. They happen to most learners at some stage, but some ringers well past 'learners' suffer too. The two battles are fought in opposite directions: one to stop the bell dropping and the other to stop it crashing onto the stay. Needless to say, both drain a lot of energy from the hapless victim and both ruin the striking.

We are told not to over-pull (at least we should be) but heeding the advice is not always so easy. No one consciously thinks 'I will ignore that advice' but lots of ringers, especially inexperienced ones, end up over pulling none the less. Some times as well as wasting effort and striking poorly, they risk failing to stop the bell crashing through the stay. So why does it happen, and what can you do about it?

Getting wound up is a good description of how it feels - quite frightening if you don't know what is happening. At first things might be OK and then you find they get worse and worse, as if the bell is fighting you. In one sense it is, but remember that any excess energy in the bell came from you. You can't blame a 'fast ball' on an opponent - there is no one else on the rope. If the bell sends you a 'fast one', it was you who pulled it too hard on the previous stroke. Of course you knew that the previous stroke was a hard pull, but didn't realise that as well as struggling with what came at you, you were helping to make the next stroke worse as well.

Let's go back to basics. Making the bell do what you want is not just about 'pulling'; it is very much about timing, ie when to apply force to the rope. This is so important that many ringers use two different words:

• Checking means applying force as the rope rises; it stops the bell swinging so high, so it then swings more quickly.

You can think of this as a four-stroke cycle, shown diagrammatically in figure 1.

To be in control you need a balance between pulling and checking, ie between force on the rising and descending strokes. This might seem obvious, but it is not easy until you get the hang of it. The rise and fall of the rope at each stroke follow in quick succession. Your arms should make a smooth, continuous movement, but that can hide the need for different force at different parts of the stroke.

You must be able to 'switch on' or 'switch off' the force between the rise and fall, in order to vary the balance between pulling and checking. If you don't switch at the top of the stroke, you apply the same force on the way down as on the way up, which does little but wear you out. Worse still, most of us find pulling more natural than checking, so when really struggling, it's easy to pull a little more than you are checking.

Getting tired can increase the risk. You might think it would reduce over-pulling, but when tired you respond a little more slowly, and delay biases you towards pulling. Of course, if you don't understand the difference between pulling and checking, it won't help either.

To unwind, you need to apply less force, but you can't just stop suddenly, or the bell would rush up and hit the stay with possibly disastrous consequences. To get back to normal, you must pull less while still checking quite hard (to handle the excess energy already in the bell). Resist the urge to follow through after the check with a correspondingly vigorous pull.

Getting out of the wind-up is harder than avoiding it in the first place. You might need to do it over a few successive strokes, rather than in one go. Be prepared also to handle any side effects of drastic action, such as over-correcting, or getting slightly out of place.

The other common battle ringers fight is when a bell continually seems to drop, despite considerable efforts to keep it up. One expects a badly going bell to cause problems, but when it happens with a normal bell, it is often to do with how it is being rung - you put a lot of effort in but somehow it all gets dissipated. This problem too is about pulling and checking. The pulling is there for all to see, and the poor soul on the end of the rope cannot intend to check the bell, so how does it happen? Heavy handedness is often the culprit.

The rope is the only contact between you and the bell. To feel what the bell is doing you must keep the rope taut for as long as possible, but if you keep it too tight, two things happen:

• The force affects the bell movement, even when you don't intend it to.

• Your muscles are tighter, your feel for the bell is less sensitive.

It can be very tempting to start pulling before the top of the swing, but if you do that, you don't feel how far the bell could have risen (especially at backstroke). In any case, it will not rise far because you are checking it. Cutting the rise short in this way is quite common, and defeats your efforts to keep the bell up.

The effect is most marked with a bell that is not swinging up to the balance, ie when ringing round the back, or when ringing up. There is no clear point at which the bell goes over the balance - near the top of the stroke it moves more slowly, and is very sensitive to the force on the rope. It is easy to misjudge this.

If you ring a heavier bell than normal, you need to adapt to the way heavy bells swing. With a bigger wheel, the rope goes up further, so if you catch it as you would a smaller bell, you will find your hands too high on the sally, thus checking it involuntarily. The secret at handstroke, when your hands rise to meet the sally, is to mirror the rhythm of your hands at backstroke, which also has a longer stroke.

With a small bell, even the weight of your arms on the rope can cause problems, especially during the up stroke, so you must support some (but not all) of their weight. To do that without letting the rope go slack requires an acute feel for what the bell is doing, so you can move your hands at exactly the same speed as the rope.

Another thing everyone is (or should be) told, is to maintain sustained downward tension on the rope for as long as practical. This ensures a well behaved rope (with less chance to swing sideways). It also makes whatever force you apply more effective, so a long gentle pull can achieve more than a short jerk. If your arms stop part way down, you are wasting some of the stroke and making things harder.

Precision control of anything from a bell to a bicycle, involves finding and keeping a balance between opposite trends. With a bike, falling off to right or left feels the same (except where you get bruised) and the correction mechanisms are obvious, though over correction can cause wobbling. With ringing too, over correction is a problem, if you don't anticipate when you have nearly corrected things and back off. What makes ringing harder is that a bell feels very different when dropping or going too high. Add to that the counter intuitive fact that pulling the bell makes it ring more slowly rather than more quickly, and the rather unhelpful fact that when you need to pull most (because your bell is dropping) your rope goes floppy, and it is not hard to see why so many ringers struggle. 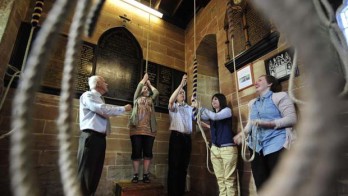 You can avoid the problems if you:

a - understand what happens

b - can feel what your bell is doing

c - can 'switch' the force during the stroke

These are inter-dependent. You need (b) to know when to do (c) and you need (a) to make sense of it all. The key is the feeling - something you need to keep on developing after mastering the basic ability to handle the bell. Exercises like ringing to the balance with extended pauses (not touching the stay) are not just for beginners. Doing it ten times on the run at hand and back is a useful competence test that all of us should occasionally try to perfect.

Another useful exercise is to reduce the overall force on the rope (without letting the rope go slack) while maintaining full control of your bell. A light touch makes it easier to feel what is happening, and easier to switch the force on and off exactly as needed.

If you have problems with these exercises, try adjusting your rope length. Half an inch can turn good control into only adequate control. Two or three inches can make it impossible. Practice making continual adjustments and learn what the right length feels like. Learn to adjust the length while ringing.

or they are free to read at www.cccbr.org.uk/education/thelearningcurve/