The peal on 2nd May 1715 at St Peter Mancroft, Norwich was a landmark event during a period when ringers were making great progress. The previous century had seen change ringing develop to the point that many of the concepts and terminology familiar to modern ringers were already in place. 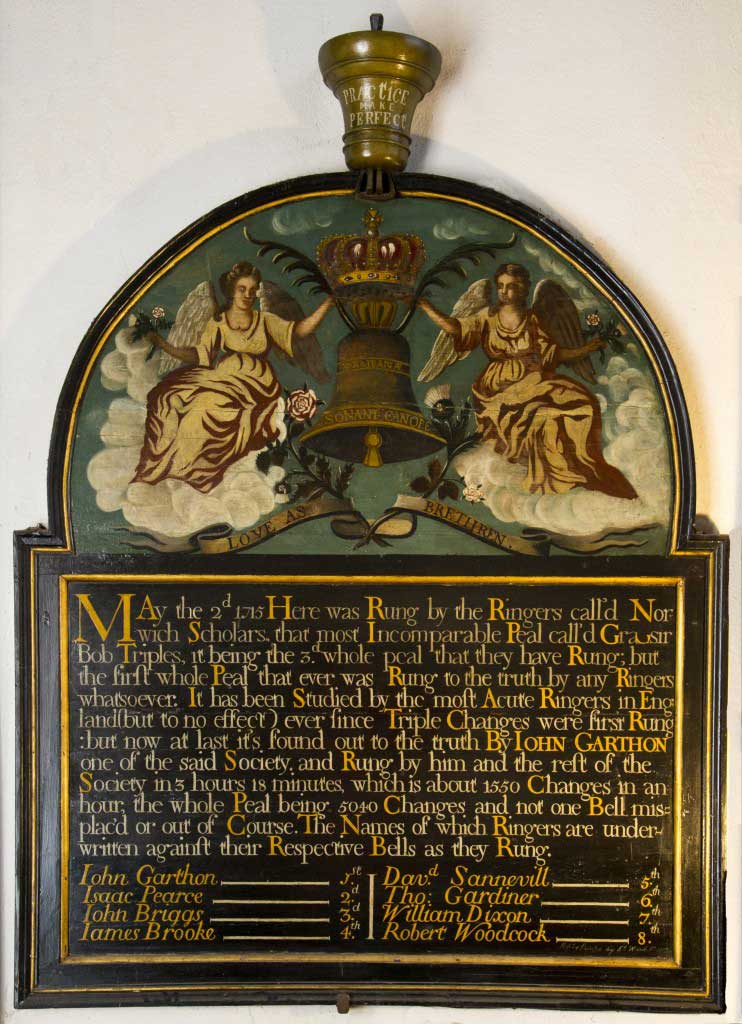 Hover mouse over picture to enlarge

Ringers had devised new methods, and and they had moved to ringing on progressively higher numbers of bells. At each stage they placed great emphasis on finding ways to ring every possible row (sequence) without repetition – what we now call an extent but which they called a 'complete peal'. But ringing the 5040 possible rows on 7 bells proved to be more challenging than ringing 'complete peals' on fewer bells.

English style ringing evolved in the 16th century when many churches had four or more bells, and when the introduction of the half wheel enabled bells to be swung high enough to control the timing of their swing. Originally it was only possible to exert control at one stroke, with the other being 'dead' because the rope wasn't wrapped around the wheel. That limitation was removed by tying or pegging the rope to make it fold back on itself to create a handstroke action. During the 17th century the half wheel progressively gave way to the full wheel. The two stroke action made it practical to change the order continually, at backstroke and at handstroke as we do today, some time toward the end of the 16th century.

Because of the physical limitations of a swinging bell, ringers imposed the constraint that when ringing changes each bell must strike once before any bell strikes again and that no bell should move more than one place between successive rows. Initially they devised schemes of 'plain changes' where only one pair of bells swaps place at a time, and then 'cross changes' where more than one pair of bells may swap places. As churches acquired more bells change ringing was extended progressively from four to five, six, and so on to higher numbers.

From the earliest times ringers had sought systematic ways to ring every possible row without repeating any of them – what they called 'complete peals' but which we call extents. By the mid 17th century they had achieved this on four, five and six bells, but ringing an extent on seven proved to be harder. First they had to devise a composition that would generate all 5040 possible rows and prove that it was true. They had to do it all by hand without computers or modern aids. Then they had the physical challenge of ringing for well over three hours, far longer than the half hour needed to ring an extent on six, and the mental challenge of doing so without making any mistakes.

Attempts to ring the extent of Triples went on for several decades. We know of some attempts in London and Norwich, and there may have been more. We know that some attempts ran the full length but were found to be false and we can be sure that there were others that failed to complete. We can't be sure whether there was a successful peal before 1715 but there could well have been, the most likely candidate being a performance at St Sepulchre, Holburn on 17 January 1690. However, the historical evidence is inconclusive, and despite the best efforts of ringing historians it is impossible to be sure either way. 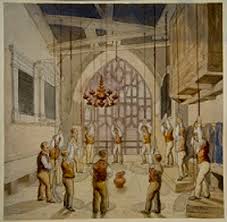 The first peal of which we do have a proper record, including the names of the ringers, is the 1715 peal in Norwich, which is described on a splendid peal board . It is the existence of a clear record that distinguishes this performance from possible earlier ones. The method rung is what they called Grandsire Bob, but which we now call Plain Bob Triples,

Having achieved the extent on seven bells, ringers realised that ringing extents wasn't a realistic way forward on higher numbers. Ringing for over three hours was quite an achievement but ringing for over 24 hours, which is what it would take to ring the 40.320 changes in an extent on eight bells, must have seemed beyond human capability, and certainly too demanding a standard to set for performances. So they changed their objectives and accepted that a 'peal' on more then seven bells would be a performance of 5000+ changes – about the same length as an extent on seven. The reason for 'any length over 5000' is that some methods on more than seven bells cannot generate exactly 5040. The requirement for peals on fewer than seven bells was also increased so that all peals had to be of similar length. That is what we mean by a ’peal’ today and it has become the ’gold standard’ ringing performance.

The peal of Triples was a major landmark, but it was a high point rather than the beginning or end of the development of change ringing. What preceded it is described above. In the couple of decades following 1715 there were peals in more Triples methods and peals on all numbers up to twelve.

During a typical year around 160 ringers ring their first peal. The FirstPeal2015 challenge to the ringing community is for 300 ringers to do so during 2015, as a fitting tribute to the landmark peal in Norwich 300 years ago. Achieving this will require a concerted effort from:

Ringers who haven't yet rung their first peal

If you are one of them, could you try to do so during 2015? If you’re not sure, take advice from someone more experienced – it might not be as hard as you think. You need to find the opportunity for a peal in a suitable method on suitable bells. Ask advice from someone who could organise a peal for you. Think about ringing some quarter peals beforehand by way of a ‘warm up’. If you want to make your first peal doubly special, why not ring it for one of the many anniversaries that fall in 2015? See: Things to ring for . . . .

Please encourage any ringers who haven’t yet rung a peal but could be capable of doing so. Help them to prepare themselves, if possible by ringing quarter peals before the peal. If you can't arrange a peal for them with a suitable band yourself then put them in touch with an experienced peal ringer who could help them.

You know the importance of a steady band for success in a peal. Could you aim to organise at least one (or more) of your peals during 2015 to include someone ringing a first peal?

Doubling the number of first pealers is quite challenge. But so was what those Norwich ringers achieved in 1715. If you want to advertise the fact that you rang your first peal in 2015, or were part of a band that helped someone else to do so, you can obtain a T-shirt with the FirstPeal2015 logo.