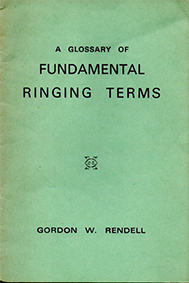 This is a really useful little book, which gives clear and well thought out descriptions of the meaning of the technical terms that you will encounter whilst ringing.

Here are a few examples:

BACKSTROKE - The circle of movement of the bell caused by pulling the rope’s end from the arms’ length position through to catching the tuffing (sally): during which the clapper changes sides of the bell, causing it to speak once at a point when the hands are moving past the face on the way up.

CLAPPER – Wrought iron tongue, consisting of a shank, ball and flight.  Hung in the bell by means of a knuckle joint and so made to strike the soundbow at diametrically opposite points, at 90 degrees to the axis of swing.  The shank fixes the effective length of the clapper and ensures that the ball strikes the sondbow in the correct spot; and the flight, an inverted conical extension of the ball, continuing the line of the shank, gives and anchorage point when fixing a muffle.  The clapper is usually 1/14th the weight of the bell.

PRINCIPLE – Method in which all the bells do the same work.

TOUCH -  Any number of changes starting and ending in rounds, where calls have been introduced to deviate from the plain course.

Copies of the Glossary are obtainable from Gordon Rendell, at Montacute, Somerset, or he will post them. Contact him at Montacute@bath-wells.org.