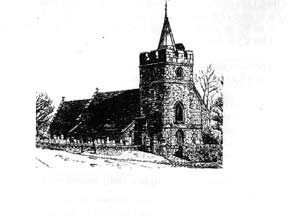 We don’t hear much about ringing on The Isle of Wight, but one of the ringers there has written an excellent book for ringers learning Grandsire as their first method.

The book says that in the plain course, the Treble and 2nd plain hunt.  It then explains that 3, 4 and  5 are plain hunting too, except for a few little hiccups.  You lead just the same as when you ring the Treble, but there are three places where the plain hunting path is disturbed.  You make 3rds at the start, ten changes later you do a step back to 5ths instead of plain hunting straight down to lead, and ten changes after that you step back to 4ths as you hunt up.  These are called “making 3rds”, “dodge 5-4 down” and “dodge 4-5 up”.

A detailed explanation of these three pieces of work follows.  There are also sections on Striking, Common Questions on the Plain Course (including “What do I do if I get lost?!”), and how to ring Bobs and Singles.  There are suggestions about which touches to call to introduce the learner to calls, and then some more advanced touches.  The book ends with an introduction to conducting.

All in all this is a really helpful, understandable little book.  It is sold to help the Brighstone Ringers pay for their new ropes. They are £1.25 each, and are obtainable from Steve Noyes, steve@noyes.org.uk.