A number of the stressful situations mentioned in the previous chapter can be lessened, or eliminated altogether, by good group management.

While the earlier stages of teaching ringing, especially bell handling, are most frequently conducted in a one-to-one situation, ringing teachers, often the tower captain or, maybe, the area ringing master, will also carry out teaching in a group situation. In some cases the ringing teacher is highly experienced in organising groups of learners but this is by no means always the case. I hope these notes will give those who feel unsure about being the boss a few ideas and a smidgen more confidence.

On the whole ringers go along to practices because they want to and are more than willing to co-operate with the teacher. The ringing teacher, therefore, usually has an advantage over the schoolteacher who regularly has to deal with those who, not really wanting to be there, can be deliberately difficult. However, ringing teachers often have to adapt to a very unusual teaching situation – there may well be a very wide range of age, ability and experience within the group. The teacher needs constantly to alter approach with regard to this (not to mention each individual’s character, style of learning, level of confidence etc.). It is not easy.

Don’t be a Tentative Tobias. You are in charge and, while you may feel less than confident, the other ringers will expect you to take charge and will accept you telling them what to do, who is to ring and what is to be rung. So don’t dither and don’t be indecisive. If you have difficulty thinking what should be rung next, for instance, write a few notes beforehand of what you plan to ring and who should be practising what. Don’t allow long, uncertain gaps between ringing – or someone else may try to take control which will not be a good idea. Say who is to conduct each piece of ringing – or ask for and approve a volunteer – and, should you need to absent yourself from a practice, state who will be in charge.

I recall being at a practice when a visitor was present. This person was not only a good ringer but, also, it appears, had a very high opinion of himself. At the end of the practice, with no reference to the tower captain, he stated, “I’ll lead down,” and took hold of the treble rope. I was shocked at this rudeness but another highly experienced ringer, equally shocked, quickly grabbed the second. Whenever the visitor began to lower his bell, the second refused to follow for a considerable time. The visitor must have realised that this was deliberate – one hopes he realised why! It was an exceedingly lengthy lower and, by the time the bells were down, several of us were having inward giggles at the power struggle between these two.

If a visitor behaves like this probably you have to accept it. However, if one of your own band says, “I’ll lead down,” (which, of course, is very, very different from asking, “Shall I lead down?”) immediately say, “I’d like so-and-so to lead down tonight.” Don’t think, “I’ll just let that pass this time,” because, if you do, there’ll almost certainly be a next time.

If you are unlucky enough to have ringers being deliberately awkward, for instance, refusing to get up to ring, being unpleasant or rude to other ringers, using language you do not consider appropriate in the tower or otherwise flouting your authority and spoiling the atmosphere, it is important to pick up on such things quickly as they are unlikely to go away. Decide whether a comment in the middle of the session is appropriate – it may be, especially to a young person, but the last thing you want is a public argument. Very often it is better to speak to the person concerned privately, afterwards. There may be a reason. Possibly the perpetrator is distressed or upset by something quite other than ringing so don’t go at him or her “guns blazing”. Rather point out politely what has displeased you and let the other person have his/her say while you listen. Consider also whether the person has some type of personality disorder, perhaps a form of autism.  Such people may be unaware of the effect of their behaviour on others and this can be extremely difficult to deal with.

Every teacher knows only too well the phrase, “It’s not fair!” to which the stock reply is, “Whoever told you life was fair?” Nevertheless, it is the teacher’s duty to be as fair as possible.  It may not be “fair” that Clever Clarinda is ringing Surprise Maximus while her twin sister, Clumsy, Careless Cornelia still struggles with Bob Doubles but that is life, not the teacher’s fault.  That is, so long as the teacher neither made a special favourite of Clarinda, nor gave her many more “turns” than her sister.  These are the two chief ways in which the ringing teacher must show fairness.  Don’t show favouritism.  Human nature being what it is, you are bound to like some pupils (and fellow ringers) better than others but this should never be apparent in the ringing room.  Give everyone an equal amount of help and attention.  Secondly, try to see that every learner, at every practice, gets at least one chance to ring whatever he/she happens to be working on.  Generally the teacher knows what each pupil will want to do and what will be good practice for each.  However, it is worthwhile actually asking everyone, from time to time, what they’d like to ring.  The more experienced ringers should also have a chance to ring something of their choice and neither children nor beginners should take up more than their fair share of a practice.  Many bands are blessed by experienced ringers from other towers coming along to help and, even if there is not a band to ring anything to challenge them, it is good to ask if there is anything they fancy ringing.

Not only is it important that a teacher is fair but he or she must also be seen to be fair.  If you have any worries that you do not remember who has rung what, or you suspect other people mutter they have not done what they hoped, set up a list – on the board or a piece of paper and say that you are doing this to make sure everyone is treated fairly.

“The man who makes no mistakes does not usually make anything” (Edward John Phelps on 24th Jan. 1899) Going wrong is part of the learning process.  It is inevitable and should be treated as such.  While praise for success, encouragement to try harder, discussion about why a recurring mistake is happening and general comments about how to improve are all important, it is also vital that the teacher shows no anger or impatience at learners’ mistakes.  To do so will only cause them stress and may eventually “jinx” pupils who will be so tense when the feared movement approaches that a mess becomes inevitable over and over again.  Remember that nearly every learner is trying as hard as possible so be supremely patient with the slower pupil.

Learners are unlikely to wish to continue ringing if you, the teacher, point out every mistake (most beginners can only even attempt to deal with one problem at a time) to the rest of the band and give the impression they are not making enough effort, when there is nothing the learner would like better than to get it right.

Make it clear who is to help the learner who falters.  It is not at all uncommon for several well-meaning people to offer advice to an unfortunate novice, already stressed by making a mistake.  Several voices, even if all giving the same advice, are impossibly confusing.  Don’t let it happen!  Ideally, stand with the learner and, if that stage has passed, but you think a little help may be required, ring next to the pupil.  Giving instructions right across the circle, although occasionally unavoidable, is disturbing to other ringers and it is not very tactful to point out loudly to everyone present whose ringing was imperfect.

Very few people can ring well when there is a deal of background noise.  It makes hearing the bell and feeling the rhythm of the ringing well nigh impossible.  Make it clear that those sitting out should not be chattering.  Explain to inexperienced ringers how they can watch, listen and learn. 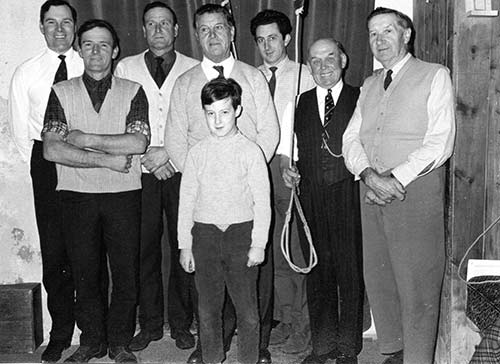 If you can create a calm, happy atmosphere, you will have calm, happy ringers who will ring all the better for it.  Of course, the atmosphere in a tower is not controlled solely by the leader, be it teacher or tower captain.  Sometimes there are less than pleasant personal issues between other ringers but the way the leader conducts him/herself can make a big difference.  Just smiling can be a help.  Smile at others, they smile back, everyone feels better.  There is no need to become Johnny Joker but making a point of being generally cheerful helps too.  Don’t let practices become too predictable and, thereby, boring.  I remember being told that a teacher should, metaphorically speaking, “enter the classroom through the window” once or twice a year.  Just now and then do something novel and unexpected, to liven up a lesson.  Probably the best way a teacher can create a happy atmosphere is by being enthusiastic and encouraging.  Remember “Encouragement is oxygen to the soul” (George Matthew Adams).  You enjoy your ringing and feel keen about it – you wouldn’t be teaching others if that wasn’t so.  Enthusiasm is infectious so make it obvious how much fun you get out of ringing and encourage others to push themselves to higher levels and take all the opportunities they can, like visiting other towers, taking part in Guild meetings or attending courses.  Offer praise, even to the experienced, whenever it is even slightly deserved, take pleasure in your pupils’ progress and triumphs and from time to time do things “just for fun”.

And, if you can manage to carry out all, or most, of these suggestions you should have a loyal and happy group making good progress.