We are grateful to Mr Chapman who has allowed us to reproduce the results of his research here,

and to Gordon Rendell who took the photos.

Fifty years ago, as the people of Holsworthy were gradually emerging from wartime austerity, they celebrated the installation of the new ring of bells and carillon at their parish church of SS Peter & Paul. The event is now passing into history, and we have no ringers at our tower today who were present then. But I have, over the years, gleaned snippets of information from stalwarts of the time, and it is these accounts, together with earlier documents, which form the basis of this brief history. 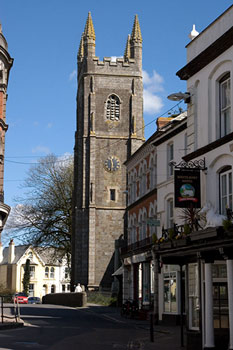 The first record I can trace is from 1553 when there were "iij belles in the towre", and in the Churchwarden's Account Book of 1694, Little, Middle and Great Belles are recorded. The next mention is in the Church Terrier of 1727 which states that there were five Tuneable Bells, this being increased to eight in 1836 by the London bell founders Thomas I Mears, all in a wooden frame. Interesting inscriptions were cast onto the face of each bell which I will describe later in the history.

One can well imagine that 111 years later, in 1947, the bells were in need of urgent attention. The old ring was in a sorry state, being on plain bearings and a deteriorating wooden frame, and very difficult to ring. It was therefore decided to seek advice on recasting.

A meeting was convened by the Rector Rev. E. Royle and included churchwardens W.Holmes and F.J. Slurnan, Captain of the Tower and Steeplekeeper C. Lyle, fellow bell ringers and members of the Parochial Church Council. I understand from the late Mr Fred Sangwin (an authority on bells) that he was invited to attend the meeting and that he advised the bells be recast with increased weight and a tenor of 15cwt. "I told them if they are going to recast, have a 15cwt tenor and you will have a good peal". How right he was!

After due consideration it was decided to obtain quotes for the dismantling of the existing ring, adding metal, rehanging with a new steel frame and all new fittings and supplying a new carillon, The companies approached were John Taylor of Loughborough, Mears & Stainbank of London and Gillett & Johnson of Croydon. After much consideration the contract was awarded to Gillett & Johnson of Croydon who, being also clock makers, priced the bells contract together with the carillon at £2200. A steering committee was formed with the intention of raising the necessary funds, the secretary and treasurer being the late Mr E. Axtell. Fund-raising went apace from 1947-49 with three annual summer fetes in the park, teas in the pavilion and evening whist drives. Clay pigeon shoots were held and numerous draws took place, the prizes including a briar pipe, Pyrex dish, Rexine shopping bag, fountain pen and many more! The many business donors were also recorded, alas only two of which are trading today; W.D. & N.C. Farmers and Fords of Victoria Square.

The eagerly awaited dedication day dawned on December 19th, 1949, and what better Christmas present could the town have had? The service was attended by the Bishop of Exeter, Dr R.C. Mortimer, and was conducted by Rev. Royle, assisted by Rev. Kingdon of Bridgrule, Rev. J.L. Jarratt of Thornbury, and Rev. Ravenhill of Sutcombe. I am told the church was full and included many ringers from surrounding towers, all eager to try the new bells and see if they lived up to expectations - how thrilled they must have been!

The following inscriptions from the old bells were cast on the new with relevant increased weights and all bells have "Gillett & Johnson Croydon 1949" inscribed around the top band.

5th Given by the family of the late Thomas Meyrick, consisting of two sons and four daughters Thomas Mears London Founder 1836 6- 3 -15 cwt

6th The expenses incurred by placing a set of 8 bells in this tower was defrayed by a subscription which was raised through the persevering exertions of Francis Thorne and his nephew Francis Honey Thorne. Roger Kingdon Rector and Francis Thorne Churchwarden. Thomas Mears London 1836 8- 0- 0 cwt

We are indeed fortunate to have been blessed with one of the ﬁnest peals of eight in the Westcountry. The end result was only achieved due to the foresight of the ringers and the hard work and total dedication of the P.C.C. and congregation, so ably led by the Axtell family.

And so we come to the present day. We have a small but happy band of ringers numbering some 12 loyal members. We practise on Wednesday evenings, and although seeking to improve our standard, do not take things too seriously! We ring for the Sunday 10am service and special occasions, including our traditional New Years Eve celebration when we ring out the old year half muffled and ring in the New Year clear. We are always looking for new ringers, either trained or wishing to learn.

Bellringing is traditionally English and a part of our heritage, but maybe in this modern age not always appreciated for what it is, or indeed for what it was meant. I feel it is our privilege and duty to keep the bells ringing to the glory of God and His creation. Long may it continue!
R.Chapman, Captain of the Tower - October 1999

To write a short history of our carillon fills me with a sense of pleasure, and not a little awe, for I feel that nothing I record can convey the true beauty of its chime, or its signiﬁcance to the town of Holsworthy and its people. To have a carillon in a tower is rare ~ to have one playing an air inspired by its famous bells is quite unique.

The people of Holsworthy have indeed been fortunate to have two carillons at their parish church, the ﬁrst being installed in 1872 at a cost of £400. The framework for the carillon and the newly-installed clock was made in 1869 by a Holsworthy tradesman, Mr S.L. Manning, and lasted 38 years.

There were two large drums of seven tunes each, which were entitled as follows: ‘Hanover’, ‘Life let us cherish’, ‘My lodging is on the cold ground‘, 'Blue bells of Scotland‘, ‘The last rose of summer‘, 'German chorale‘, ‘Home sweet home’, 'O rest in the Lord‘, ‘Holsworthy church bells No 1', ‘Morning glory‘, ‘Holsworthy church bells No 2’, ‘The return‘, ‘The pilgrim’ and ‘Trinity Church New York‘.

This apparatus continued to function, albeit spasmodically, until 1910, after which the decision was taken to seek advice on its replacement. Under the guidance of the Portreeve, Dr Linnington Aish, the people of Holsworthy started a fund for the repair of the carillon and had raised £100 by 1912.

The old apparatus was dismantled and dispatched to Germany for a complete overhaul, but the 1914-1918 war intervened, and short of coming back in the form of bombs, it was never heard of again!

And so we come to 1949, when it was decided to install a new carillon at the same time as a new ring of bells; a gigantic ﬁnancial commitment by any standard. As with the bells, the contract was awarded to Gillett & Johnson, bell hangers and clock makers of Croydon. The mechanism they installed is a ‘one off‘ designed especially for our church and operated on an electrical microswitch/compressed air principle. We have a total of 13 tunes (listed below) which are introduced down in the church on individual drums. and played at 3-hourly intervals during the day from 9 am. to 9 p.m.

The strife is o'er, the battle done .

Ye watchers and ye holy ones

We love the place 0 God

Through the night of doubt and sorrow

God that makest earth and heaven

The king of love my shepherd is

The last of these tunes is the ‘jewel in the crown‘; the famous air for which the following words were written;

The Glory of God proclaim,

And summon all folk from far and near

To bless and adore His Name.

O‘er hill and dale their call they send

When e'er we hear them peal

We know that we should at Church attend

And there in reverence kneel,

Oh every Christian should obey

The message the Church bells ring

And to God's house pursue his way

To worship our Heav‘nly King.

For there we our hearts and voices raise

With those of the Church above

In singing our Great Creator's praise

The wonderful God of Love.

With Angels, Saints, and Martyr throng,

And to the bells‘ glad sound

We offer up prayer, with holy song,

Which rings the Universe round,

The Church here on earth and Heavenly Host

The Father, Son, and Holy Ghost,

One God now and evermore.

The music was composed by Dr Samuel Sebastian Wesley. It is known and loved worldwide and is reputed to have been written beneath the large beech trees on the southern side of Badock Gardens. [S.S. Wesley came from a very religious background, being a grandson of Charles Wesley and a nephew of John Wes1ey, both instrumental in the formation of the Methodist movement.) He was at that time the Organist of Exeter Cathedral and wrote the piece as a tribute to the Holsworthy bells. He gave the first public rendering of his composition at the dedication of Holsworthy Church organ in 1865. The words were written at a later date by the Rector’s Warden; F I Sluman.

We have had quite a number of people over the years visit our church knowing it to be the home of the tune and its lovely bells. Surely there can be nothing more nostalgic to the true Holsworthian than the sound of this haunting music ﬂoating over our ancient market town. Pray God, as we go into the new millennium, that it may ever be so.

This concludes my written history of Holsworthy Bells and Carillon; an important feature of our town's heritage. The torch has been handed to us by ringers now passed on, and we must ensure that we continue their example by keeping the tower of Holsworthy a beacon of hope and musical joy today, tomorrow and forever more. 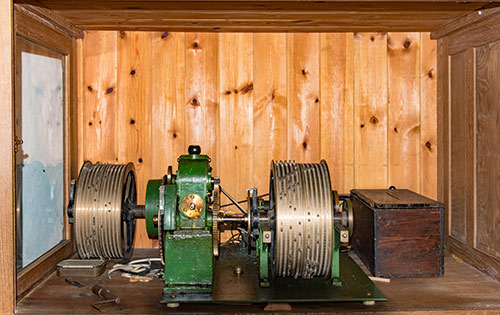 1.The Sender Unit carrying the drum with
the pins that contact the micro-switches;
on the left is an alternative drum waiting
to be fitted. 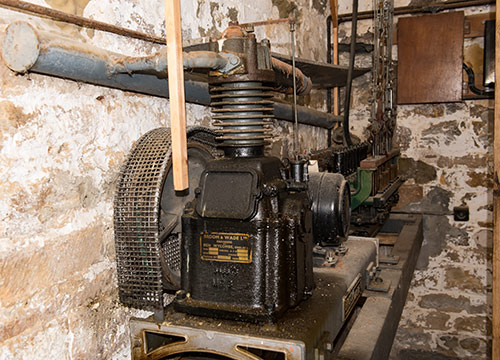 2. The Compressor unit supplying the
pressure to operate the pistons
connected to the chiming hammers.
When required, a valve is opened by a
solenoid controlled by the micro-
switches and air pressure is allowed into
the cylinder to force the piston down.
The square box on the wall holds the
electric solenoids to operate the valves. 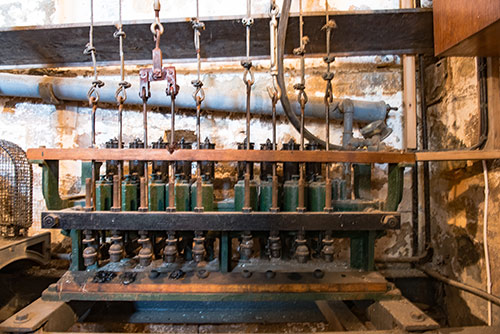 3.The cylinders containing the pistons
which pull on the wires connected to the
chiming hammers. The pins on the
drum downstairs in the church, press on
the micro switches that operate the
solenoids in the clock chamber. These in
turn open the valves that let the
compressed air into the cylinders to
push the pistons down. 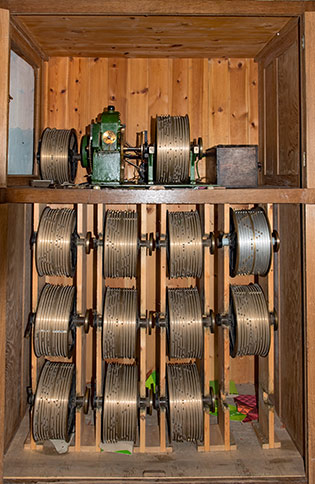