On 1st November 1943 the villagers of Imber were summoned to a meeting in the village school where they were given forty-seven days notice to quit their homes in order for American troops to train for the D-Day landings. Gradually the villagers moved out with their possessions, mainly to other villages in the Salisbury Plain area.

The last wedding in the church was on the 27th November 1943 after which the church was locked and the windows boarded-up. The furnishings and fittings were distributed to other churches, mainly in Wiltshire and Edington Priory in particular. The bells were stored, pending a decision as to their disposal.

By the 17th December the last of the villagers had gone. Although it is said that the War Office promised the villagers that they would return after the war, the village and much of the surrounding area has remained in military occupation. Only the church remains intact. 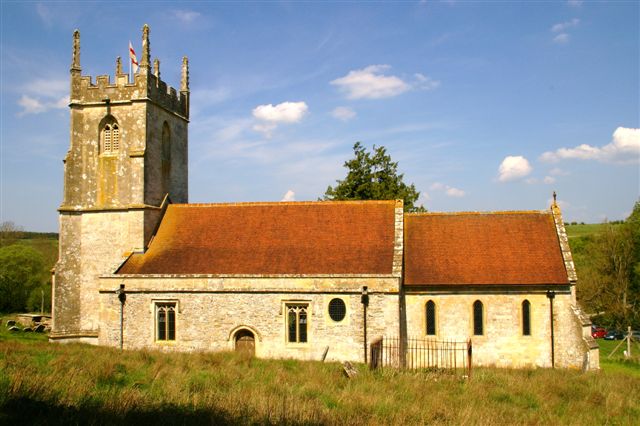 In 2002 the Ministry of Defence terminated it’s agreement to maintain the church and churchyard, resulting in the redundancy of the Grade II church building. During the consultation period to determine the future of the church, English Heritage concluded that it was worthy of Grade I listing. This strengthened the case for vesting in The Churches Conservation Trust, which took place on 14th September 2005. Essential repairs commenced and were completed in a number of campaigns.

The bells remained in storage at Whitechapel until 1968 when they were offered to Edington Priory for use in the proposed ring of ten bells.  Whilst the old Imber third by Abraham
Rudhall 1721 became the fifth at Edington, the remaining bells were scrapped and not incorporated in the new bells as the inscription on the treble bell suggests: ‘These five bells from Imber on the Plain at Edington do ring God’s praise again’.

It is now a little over two years since Matthew Higby suggested the installation of a light ring of five bells, occupying the 18th century frame left in situ. Matthew had already acquired five suitable bells and the funding from the Keltek Trust. Not only had the Keltek Trust allocated an interest-free loan to cover the cost of the installation but it had generously donated the second bell. The writer, now retired from The Churches Conservation Trust, prepared a submission to the Trust requesting permission for the Imber Bells’ Project to proceed. This received a speedy and positive response. At a late stage the number of bells was increased to six with the acquisition of a late 19th century bell from West Malling in Kent. This is hung in a separate steel frame beneath the old timber frame.

So it was early on the 30th August, 2010 that Matthew Higby, Graham Wright, Roderic Bickerton, Michael Royalton Kisch, Dave Kelly, Aaron Moulder, Jason and Sarah Beck and Neil Skelton gathered in Warminster and proceeded in convoy to Imber. On arrival at the church the bells and fittings were unloaded, and preparations to hang them proceeded without delay. By late afternoon the bells were ready for ringing and several touches of Doubles and Minor rung.

Public access to Imber is permitted by the Ministry of Defence for up to 50 days in each year although in practice it is of the order of 30 days. Usually permitted at Christmas, New Year, Easter and during August. Information on the church, access and opening times can be found on: www.imberchurch.org.uk