The Legend of Montacute, Somerset 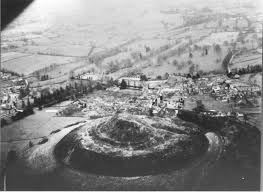 In the year 1035 or thereabouts, a Montacute blacksmith, who was also the sexton of the village church, had a dream one night that he should go and tell the parish priest that he, the priest, should go to the top of St. Michael’s Hill, where something was buried.

In the cold light of day he decided that it must have been something that he had eaten and thought no more about it.  Several nights later he had the same dream again; more vivid than the time before and even worse; an apparition that frightened him near to death visited him.  Waking in a cold sweat he told his wife the dream and said that he was going to see the priest at once.  His wife was less than sympathetic and told him not to be such a fool, for if he did such a thing he would be the laughing stock of the village.  He felt that she was probably right and as he had no wish for his standing in the community to be questioned, he did nothing about it.  He didn’t sleep too well for the next few nights, fearing a reoccurrence of his nightmare, with some justification as it happened, for back it came and this time the apparition seemed to have lost patience with him because it took hold of him and left him with the flesh of his arms torn.  This time he dressed frantically, stopping just long enough to show his wife the marks on his arms before rushing off to wake the parish priest. Who, on being told the story of the three visitations and seeing the wounds, decided to take the whole thing seriously.

All this rushing about had awakened some of the residents, who when they found there might be something interesting about to happen, aroused most of the village.  They gathered outside the church and formed a procession to walk to the top of St. Michael’s Hill.  The name Montacute is derived from the Latin Mons Acutus, mount acute, steep or pointed hill, and as they trudged around and up the steep sides they sang a litany.  There were a lot of them and many had brought spades in the hope of finding buried treasure and it was not too long before someone struck a large, flat stone which they proceeded to lift.  Beneath it they found a large black flint cross, finely carved with an image of Christ crucified.  Under the right arm of the cross lay a smaller crucifix and under the other, an ancient bell and a copy of the gospels.  A problem now arose, several in fact.  The cross was very heavy, they would need equipment to move it, move it where and to whom did it belong ?  Also it looked like rain.  They took the bell, small cross and bible down to the church for safe keeping, while some stayed to erect a shelter to keep the cross and the guards dry.  But whom should they tell of the find ?  Someone suggested Tofig, King Canute’s standard bearer who was in the area, so a messenger was sent off to find him.  He came and organised the removal of the cross from the hill and had it loaded onto a wagon together with the bell and gospels, other beautiful ornaments and provisions for the journey. The smaller crucifix would remain in the church.  Twelve red and twelve white oxen were acquired to haul the wagon and then came the most difficult part, where should they go ?  Durham, Winchester, Glastonbury, London and Reading were all mentioned, but the drivers with all their goading could not persuade the oxen to move. 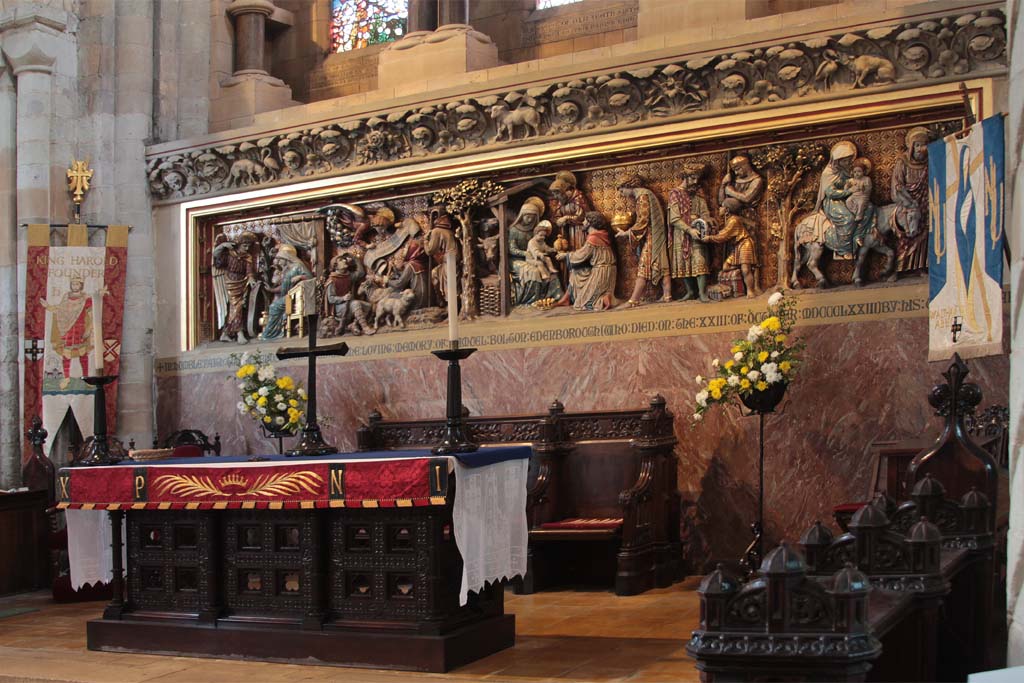 Then Tofig thought of Waltham in Essex, where he had already built a small house, with a little wooden chapel, on his own estate and he promised that he would build a greater church there if it should so please God that the Holy Relics should be taken there.  At once the oxen moved off so easily that it appeared that the wagon was driving the oxen rather than them dragging it.  At last it arrived at Waltham, where it was set up and became the glory and the greatness of the Abbey of Waltham Holy Cross. King Harold enlarged the Abbey and the Holy Rood became the special object of his devotion and the rallying cry of his men at Senlac.  Before it he knelt on his way south to fight the Norman invaders; from it he received warning of his impending doom.  It became the battle cry of the English and rallied his men to make the last attack and to die in defence of the Holy Cross and their English land.

Well, that’s part of the story, we know that the cross arrived in Waltham and it is recorded that Tofig’s chapel was named Holy Cross.  Incidentally, at Waltham he is known as Tovi and one of his direct descendants was contacted by one Michael Zair who made a pilgrimage walk from Montacute to Waltham in October 1999, No one at present is certain of what happened to the cross, it could have been smashed at the dissolution, but in view of its previous history there is surely room for conjecture.  How did it find its way to Montacute in the first place and from where ?  There are those at Montacute who would suggest that it was previously held at Glastonbury and when the Danes were getting too close for comfort it was evacuated by water to Montacute where there was a strong and distant hill, near where the water ended and the Celts had built a fort, and buried there.  At that time one could travel by boat from Glastonbury to just below Stoke sub Hamdon Priory.  In fact the roadway into the village from East Stoke is known as Sea Wall.  Waltham however, says that it was sent from there in the first place and Tovi went to Montacute to fetch it back.

I can’t help but feel that such a valuable relic would have been put in a place of safety at the first hint of anything that would have put it in jeopardy.  Perhaps we are just waiting for another blacksmith when the time is right ?  Still, I always was an incurable romantic.

The church at Montacute currently has two small crucifixes, but it is not thought that either of them is the one that was dug up. There is no sign of the Bible either. It is thought that the bell was rung all the way to Waltham!

I contacted the Waltham Abbey ringers back in the 1990’s and invited them down for a week-end’s ringing and, as a result, a reciprocal arrangement developed. Initially the Abbey itself wasn’t interested in celebrating the Legend, as the Rector was on the point of retiring, but a couple of incumbents later some interest was shown and the festival has developed into a three-day event. 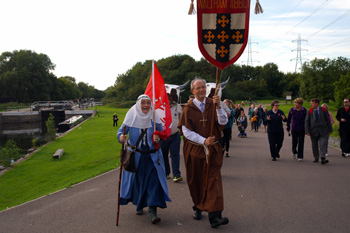 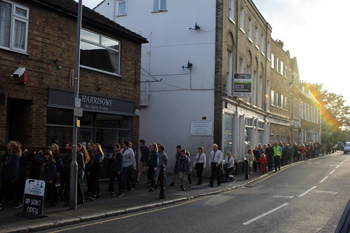 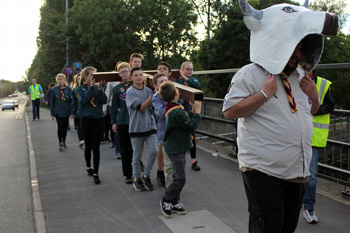 The event happens roughly like this. On Friday they have two sort of services in the Abbey where they have all the children from about four schools in the area and a play is performed about the finding of the cross at Montacute, its transportation to Waltham and its arrival there. On Saturday it’s like a church Fête with a barbecue. A long procession with a large cross, carried by the scouts, starts from near Waltham Holy Cross at about quarter past five and makes its way to the abbey to the sound of a quarter peal, hopefully on the twelve bells, to finish at six when they arrive at the abbey door and beg to be allowed in. A service then follows, including a candle-lit procession around the abbey grounds to finish with a wine and cheese supper. Sunday has two services, ringing for both; holy communion in the morning and Choral evensong in the evening. 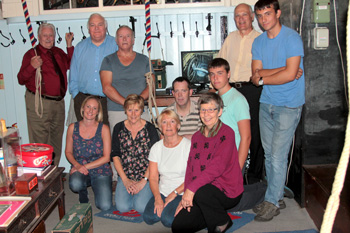 I’m the only representative, or pilgrim, from Montacute and I am invited to stay with the organiser, Clive Simpson and his wife Jane, who feed and entertain me most royally. In 2012 I was presented with a pilgrim’s flask, cast in pewter from an original eleventh century mould held in a London museum. It is one of two, the other one being given to the Bishop of Chelmsford. It is one of my most prized possessions.