This is an account of the hanging of the Bourdon bell at Liverpool Cathedral, which has been written by Geoffrey Passey, who rings at Haselbury Plucknett.  Geoff’s brother-in-law, Ronald Harris, was a Director of Machinery Installation Ltd, of Acton, London at the time, and he was in charge of the job. 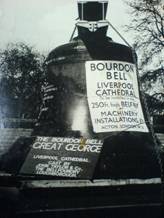 A number of readers will have seen the D.V.D. entitled “The Craft of Bellringing” showing, amongst other things, Liverpool Cathedral bells.  The following are some of the principle features of getting those bells installed.

The Cathedral itself was designed by Giles Scott (later Sir) and was started in the early 1900s. 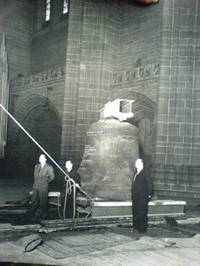 The Bourdon bell – Great George- was ordered before World War 11.  When cast it was stored at Taylor Bros for several years. It was transported from Taylors on April 15th, 1951 and manually lifted into position on May 7th.

The lift started at 9.00am and took 11 ½ hours of winding, by a team of twelve men, working in teams of four.  It took some 25,000 turns of the specially manufactured winch used for the lift.  The men worked continually, in 10 minute sessions, with a 20 minute rest.  Lifting never stopped.

The bell weighs 14 tons, the clapper ¾ ton and the headstock 2 tons.  The mouth of the bell is 9’ 6” diameter. While lifting, the bell had to pass through a tight aperture in the ceiling, some 160 feet above the floor, before completing the 250 foot lift.

The complete ring of 13 bells had been lifted into position in the days before Great George, and they in total weighed in at over 16 tons – the heaviest and the highest ring in the country. They were cast at Whitechapel in 1939. 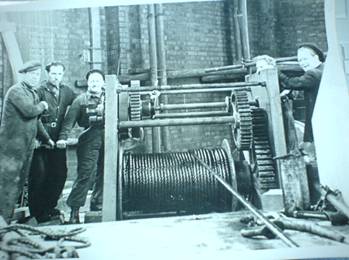 The Bourdon is reputed to have the deepest tone of any in the country and rates second heaviest, after Great Paul, in St Paul’s Cathedral, at 16 ½ tons.

On the Cathedral website it says “History does not record the man who struck the bell with a hammer ‘to see if it worked properly’” It was in fact one of the labourers who had been winding all day – an Irishman. Apparently he was reprimanded because the Queen had been invited to strike the first blow on the bell. It was blessed on June 17th, 1951, when it was heard for the first time officially!!