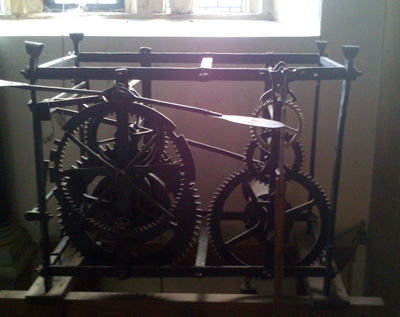 This clock was made between 1674 and 1686, probably by Thomas Bartholomew of Sherborne, a well known clockmaker who made a similar earlier one at Yetminster.

The frame is wrought iron and still has the original weights of stone clasped with iron bands, weighing some 70 pounds, which would have had to be wound up 12 feet a day. No trace of the dial remains but it would probably have been wooden and painted with gold numerals.

The clock workings were removed from the tower sometime before 1925, and stored for display in the church. It was cleaned and painted in 1972.

The clock that is now in the tower was installed to mark the Millennium, and was paid for by public subscription. It is absolutely accurate as it is controlled by the Rugby time signal.

Thanks to Helen Pharoah for supplying this information, and to Jono Chapman for the photograph.

Hover over the photo to enlarge it.