Tips on learning to ring down "In Peal"

1. You must be competent in ringing a bell down on your own.

2. Do not attempt to lead down on the Treble until you can do it perfectly on an inside bell. 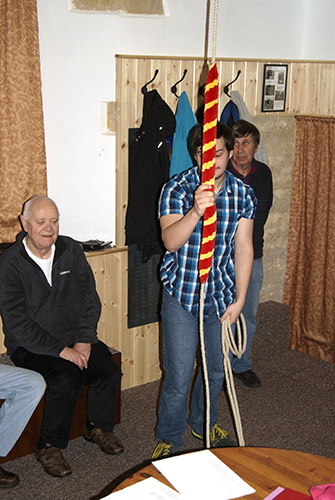 5. To obtain this new speed you will have been nipping in the backstroke, inch by inch, just enough to stay close to the bell you are following.  As the tail end below your bottom hand gets longer you will at some time have to make the first coil.   Don't be too eager, if you make it prematurely the bell will come down too quickly and you will be way in front of everyone.  Wait until you have approx.25cms ( 9"-12" in old money) flapping below your bottom hand.  Immediately you start to come down from the top of the stroke, drop your bottom hand down to the end of the rope, simultaneously bringing your top hand down to join it and so making a nice coil.  But BEWARE.
This coil will be too large and will bring the bell down too quickly, so as the rope rises, let the coil pull smaller over the back of your hand.
Still concentrating hard on listening to the bells and keeping up with that bell you are following, keep nipping in the rope to maintain your position until the first coil is large enough to be made into two.    If you can make the coils on the downstroke as described, onlookers will say ' That's Magic'.

6. When the bell is about half-way down there is no further control with the sally, so forget it. Drop your hands right down at every stroke. This will stop it flying around.    At the same time - keep listening and nipping in that rope to keep in time.
If you find your bell is getting too quick (i.e. overtaking the one in front), don't be tempted to pull harder as this can make matters worse. It is probably best to let your bell "freewheel" until the others come back to you, but be ready to go with them as you can easily get left behind.

7.  As the bells come down to the chiming position, contrary to what you may think, this is where you really have to work on the sally. The rate will have come right down. The fastest you can go is the rate at which the Tenor (or heaviest bell) can chime when fully down, so the lighter bells must be kept swinging higher to accommodate this.
This becomes most noticeable on peals of ten or twelve bells where the treble is say 2cwt. and the tenor maybe 30cwt.
Check the sally hard to keep the clapper striking, and then pull hard enough to maintain your position in rounds.

8.  Lowering "In peal" is an ultimate team effort. The treble cannot control it. If the middle bells do not close up at the start the
tenor man will struggle to keep his bell up and you will be there all night.
On heavy bells the rate must be matched to the rate that the tenor can be lowered. The treble lead must wait for the tenor to strike, with the other bells following at appropriate intervals as determined by rhythm AND YOUR EARS.

9.  It is not expected that novices should be immediately perfect.  (Only those who think they are !)
Start by trying to follow an experienced ringer lowering at a steady rate.  Then ' Ding - Dong - Bell'  at the beginning
or end  of a practice is a good exercise. Perhaps allowing the learners to ring down the front three, followed by the back
three could be more advantageous than a horrible lower on six, provided they do it properly. The neighbours might think so.
By this time you should be able to manage on eight without disgracing yourself !

10.  When ringing at other towers away from your local area, the words of command may vary, so be prepared.

WELL DONE but don't forget those EARS. Listen to the Music of the Bells. It can be beautiful but it doesn’t just happen.

What is heard outside the tower is what adds up to good ringing.