Lowering The Treble in Peal, 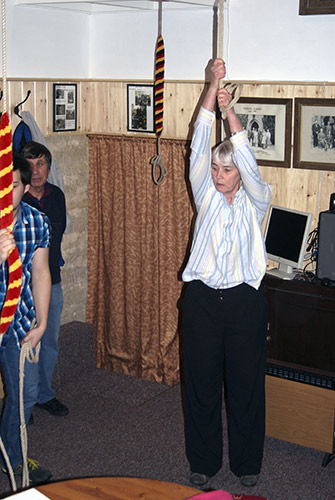 I thought I would try to explain how I lower the Treble in peal.  Understanding how this works would be a help to all the members of a band who, after all, are trying to follow the treble and keep up with it.

Firstly, wait until the rounds have settled well.  Then, call “Downward” at Handstroke.  The following Handstroke, close up the Handstoke lead so that it is immediately behind the Tenor – cartwheel fashion.  Having done this, if you ring your Backstroke at the same rate as before, you will crash on top of the Tenor, so hold the Backstroke up and bring it down after the Tenor with exactly the same space as there is between all the other bells.  Continue to ring with closed Handstrokes, listening really hard to the Backstrokes, never allowing them to drift wide.  After this, lowering virtually happens on it’s own.  You just have to take up minute amounts of rope, concentrating on listening even more than looking.

About half way down, things level off as you wait for the back bells to catch up with you.  At this stage, sometimes you feel as if you’re stuck and you’ll never get down.  But this is the stage when you can get some fantastic music, and after all, what’s the rush?  It’s better to have a really good steady Lower than a quick bad one.  Don’t panic, keep the Backstrokes in, and eventually the Tenor will stop striking at Backstroke.  Things will move a little faster now, and you will have to work to lose the gap where the Tenor’s Backstroke was.  Close your Handstoke up after the Fifth.   Soon your Handstoke disappears, so adjust your Backstroke accordingly.  Don’t rush. Allow the back bells time to slow down gently – you don’t want them to lose the clapper and stop striking.  At last, when the bells are all right down and chiming beautifully, you can call them to miss and catch.  It’s a common mistake to do this too soon – you feel as if everyone is waiting for you, but don’t be tempted to do it until you are certain that every bell is ready to stop swinging and thus to stop striking.

If a member of the band gets in front or behind of the rest, then the skilled Treble ringer will keep the bells where they are until that person gets back in place.

If you want to learn to lower the treble, ask the person who does it normally if they’d mind ringing  the Second.  Then if you go wrong, the rest of the band won’t follow you, and you’ll have a chance of getting back to the right place again.