from “The Bellringer’s Bedside Companion” by Steve Coleman, by kind permission of Sue Coleman 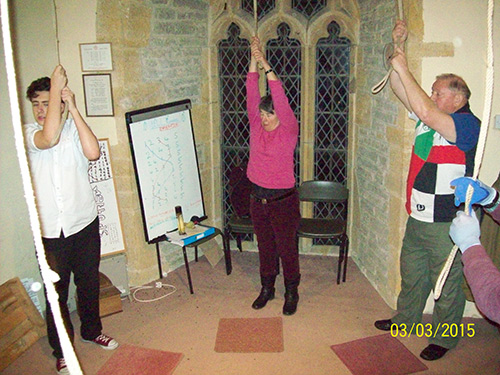 For a lower in peal that will not do.  The bell will try to come down faster than you want it to, and you must not let it.  Certainly you want to take in rope so that the bell swings increasingly faster and lower, but you also want to keep it up.  So you must ensure that you pull your backstrokes hard enough.  Nothing in lowering is more important than this.  Indeed, you must pull your backstrokes harder than you would expect to.

Apart from coil-taking problems, the biggest single cause of inability to lower in peal is not pulling the backstrokes hard enough.  So if in doubt, pull harder.  If you feel this makes your handstroke too wide, use your muscles and pull your handstroke sooner.  In time you will get your pulling just right, but you will reach that stage much sooner by over-pulling than by under-pulling.

And now for the big one.  In the whole field of ringing nothing strikes terror in the hearts of the inexperienced than coil-taking. Many, many people are genuinely terrified of taking their first or second coil.  They dread the moment in anticipation, and they find it ghastly in the actuality.  Some hate it so much that they refuse to ring down at all, whilst others can never improve because they are too worried about the whole thing to notice what they are doing wrong.  The bell always gets down somehow, but instead of three neat coils in the left hand, there is only a twisted mass like a bundle of knitting.  And even those who escape the bundle of knitting syndrome, can still find their bell plunging down after the first coil, because they haven’t taken it correctly.
If you suffer from these problems, don’t despair.  Not only are there many fellow sufferers but you really can sort things out.

If you’ve enjoyed this excerpt you can order a copy of the book from Sue Coleman, 46 Byfords Road, Huntley, Glos, GL19 3EL.  There’s a lot more about lowering, and many many other subjects as well.  In addition, Steve has also written several other books.