To have the opportunity to visit one bell foundry may be regarded as good fortune, to visit two in one year is indeed an embarrassment of riches. (With apologies to Oscar Wilde!) 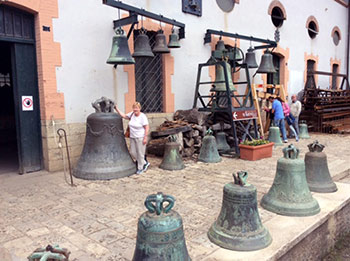 My husband and I are already booked on a trip to Taylor’s Bell Foundry at Loughborough to see the casting of one of the new bells for St Mary’s. While we were on holiday in Italy recently we visited the Marinelli Pontifical Bell Foundry in Agnone, near Isernia, in the Province of Molise. This is the oldest bell foundry in the world and the second oldest family business in the world, still run by descendants of the original Marinelli Family.

In Agnone the tradition of smelting and moulding metals is 2,500 years old, probably due to the fact that this small town was at one time rich and powerful, attracting hard-working, skilled artisans to the area, many of whom specialised in the production of sacred bronzes. The skill of moulding metals was perfected in the 13th Century by a small colony of Venetian craftsmen and army veterans, who began to specialise in the complex and, at that time, mysterious art of smelting bronze. In the second half of the 13th century a certain Nicodemus Marinelli started adding his name to the bells. His Agnone foundry has continued with the same name and high standard of craftsmanship, documented since at least 1339, handed down from generation to generation without interruption, making it one of the oldest industries in the world. 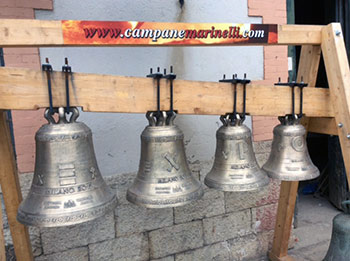 Until the early 1900s various families of bell makers still survived in the town but this is the only one surviving today. In 1950, following a devastating fire, the foundry relocated from the historic city centre to the outskirts of Agnone, where the master founders were able to replicate the skills and traditions of their ancestors.

On our visit we were given a brief history of the Family, the foundry and the history of bell making, Agnone style. To construct a bell a complicated, hundred year old procedure is followed, the whole process taking about three months. Construction begins with a Soul, a wooden template. The Soul is then covered in clay and when a smooth surface is obtained the dedications, pictures and artistic friezes in wax are applied. On this False Bell different layers of clay are applied until the required thickness is achieved; this is the Mantle, which is then heated so that the artistic prints are left in negative form on the inside of the Mantle. Two of the current members of the Marinelli Family, Paola Patriarca Marinelli and Ettore Marinelli are renowned sculptors, producing bas-reliefs, sacred art, civil and religious monuments, statues, medals and trophies, as well as working on the artistic designs on the bells. 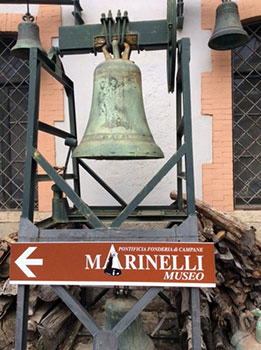 The False Bell is then destroyed and the Mantle is positioned on the Soul. The model is then placed in the casting pit. Bronze for the bells is an alloy comprising 78% copper and 22% tin. The molten bronze is poured in to fill the free space between the Soul and the Mantle; fusion occurs at 1,200ºC. The bell is allowed to cool slowly and is then extracted from the casting pit and removed from the Soul and Mantle. It is cleaned, chiselled and finally has the clapper installed, then the process of musical testing and calibration of the bell takes place.  Bells with beautiful artistic reliefs and perfect sonority leave this foundry for locations all over the world.

The Peace Bell in Tirana, Albania, fused with the shell cases collected by Albanian refugees; The Bell of Marcinelle, which marked the disastrous mining accident at Marcinelle, Belgium; The Jubilee Bell in the Vatican Gardens; one of the bells of the Abbey of Montecassino, were all cast in the Fonderia Marinelli, as well as bells in New York, San Francisco, Buenos Aires, Jerusalem, Montreal, Tokyo, Beijing, Hiroshima, New Delhi and many other places around the world.

In 1997 The Historical Museum John Paul II was built next to the foundry, where antique tools, moulds and models are displayed, as well as rare texts and antique documents relating to the art of bell making. There are also bells of various ages, indicating changes in structure or technique as the skills and research developed. There is also a library, the archive, a video library and a conference room available for serious study or research. This foundry is well worth a visit for any ringer. The next Branch Outing venue, perhaps?