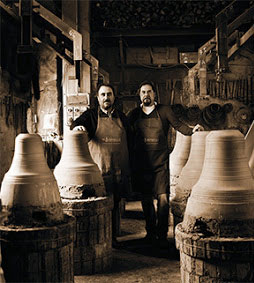 The Marinelli Pontifical Bell Foundry in Agnone, near Isernia, in the Province of Molise is the oldest bell foundry in the world and the second oldest family business in the world, and is still run by descendants of the original Marinelli Family.
In Agnone the tradition of smelting and moulding metals is 2,500 years old, probably due to the fact that this small town was at one time rich and powerful, attracting hard-working, skilled artisans to the area, many of whom specialised in the production of sacred bronzes. The skill of moulding metals was perfected in the 13th Century by a small colony of Venetian craftsmen and army veterans, who began to specialise in the mysterious art of smelting bronze. In the second half of the 13th century a certain Nicodemus Marinelli started adding his name to the bells. His Agnone foundry has continued with the same name and high standard of craftsmanship, since at least 1339, handed down from generation to generation without interruption, making it one of the oldest industries in the world.
The Catasto Onciario of 1753 shows seven families with the surname Marinelli, two of which are described as ‘Fabricatore’ one ‘Carboniere’ and the rest as ‘bracciale’. Until the early 1900s various families of bell makers still survived in the town but this is the only one surviving today.
To construct a bell a complicated, hundred-year-old procedure is followed. The whole process taking about three months. Construction begins with the Soul, a wooden template. The Soul is then covered in clay and when a smooth surface is obtained the dedications, pictures and artistic friezes in wax are applied. On this False Bell different layers of clay are applied until the required thickness is achieved. This is the Mantle, which is then heated so that the artistic prints are left in negative form on the inside. Two of the current members of the Marinelli Family, Paola Patriarca Marinelli and Ettore Marinelli are renowned sculptors, producing bas-reliefs, sacred art, civil and religious monuments, statues, medals and trophies, as well as working on the artistic designs on the bells.
The False Bell is then destroyed and the Mantle is positioned on the Soul. The model is then placed in the casting pit. The molten bronze is poured in to fill the free space between the Soul and the Mantle. Fusion occurs at 1,200ºC. If the bell is destined for a church or other religious purpose the local priest will be called to bless this process which is also known as the ‘birth’. The bell is allowed to cool slowly and is then extracted from the casting pit and removed from the Soul and Mantle. It is cleaned, chiseled and finally has the clapper installed. Then the process of musical testing and calibration of the bell takes place. 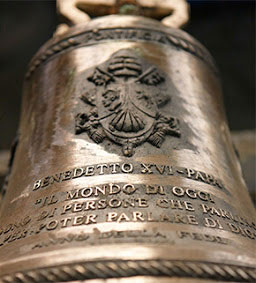 Bells with beautiful artistic reliefs and perfect sonority leave this foundry for locations all over the world.

Among the bells cast by The Marinelli Foundry are:

All were cast in the Fonderia Marinelli, as well as bells in New York, San Francisco, Buenos Aires, Jerusalem, Montreal, Tokyo, Beijing, Hiroshima, New Delhi and many other places around the world.

Only the best charcoal will create the high temperatures needed for the furnace. The Carbonieres led a lonely life, since they must stay near to the kiln to control the ‘burn’ although those forced to travel to find better quality wood often took their families with them.  They were frequently ostracized and considered the lowest on the social scale of the times.