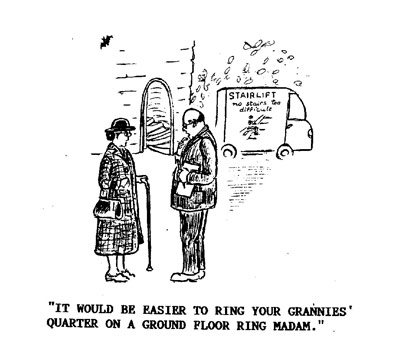 These days, and perhaps always, many people look for new activities when they retire and, for some, this will be ringing.  This chapter is partly about some points the teacher should be aware of when dealing with those who take up ringing when they are older and partly about how teachers and tower captains can help older ringers who are beginning to suffer the myriad misfortunes of old age.

Of course, aging is an individual thing; some are still sprightly in their nineties, while others can seem “old” from a young age.  However, few people in their 60s have quite the vigour they had in their 20s and 30s.  As the saying goes “Old age comes at a bad time”.  Just when a person has developed a greater understanding of the world and other people, more self-awareness, more self-confidence, strategies to compensate for natural weaknesses, less concern about what others think of them and superior ability to express themselves verbally, physical fitness and capability will, in most cases, be starting to decline.  Ringing, however, is not particularly strenuous as activities go, as it depends more on technique than brute strength.  We do not ask ringers to retire and helping older people to continue ringing for as long as they possibly can, as many towers do, is, I feel, very important and something the bellringing fraternity in general should be proud of.  So long as acceptable striking can be achieved, in reasonable safety, no ringer should be asked to leave the band.

In general, upper body strength, including strength of arms, declines more slowly than muscular weakness develops in other areas of the body but older learners may well be suited to lighter bells and shorter sessions of ringing.  It has to be accepted that Aged Ada will probably take longer to learn than a young person but “old dogs” certainly can learn “new tricks”.  There are, however, some psychological reasons why an older person may take longer to become a competent ringer.

Older people can perform as well as younger ones at tasks which have no time limit.  However, ringing is a fairly fast and furious business.  Ada may find ringing difficult as there is so little “thinking time”.

This is the learning of a task so well that no conscious thought is required to perform it.  We do not consciously think about the movements required for us to walk (although a toddler takes a considerable time to habituate the art of walking).  We can perform other tasks at the same time once the action is habituated e.g. Drivers can steer, change gear, talk to a passenger, admire the view and think about what to have for tea all at the same time.

Young people are quicker at developing automatic responses for a task and an experienced ringer will have habituated a great many things – handling a bell, hearing the bells, using ropesight, picking out the sound of one’s own bell and ringing a method.  All these will be done simultaneously and automatically.  Some – or all of these – will take a long time to become automatic for Ada.

This, too, tends to deteriorate as people age.  Ropesight requires visio-spatial skill and, unfortunately, of the hardest type.  The easiest challenge would be to differentiate two contrasting objects e.g. a small red square and a large blue circle which are close together in the centre of the field of vision.  Distinguishing eleven identically coloured ropes, not only ahead, but also around the periphery of vision is about the hardest visio-spatial attention task one could dream up.

This is another skill required by ringers but, again, ability in this tends to deteriorate as we age.  To strike well a ringer needs to co-ordinate ropesight, listening skills, rhythm, bell control, to remember where he/she is in a method and to carry on using all these skills for considerable lengths of time.  Because this is so difficult for the likes of Aged Ada and her friends (who with age have perfected superior skills to compensate for, and hide, their various weaknesses) they may “screen out” some elements.  Generally visual aspects take priority so Ada may ignore the sound of the bells and concentrate on ropesight.  Less commonly listening will take precedence while sight is largely screened out.  Neither of these situations is ideal but it does not necessarily occur to the teacher what may be happening and those teaching older people need to watch out for this.

This too grows weaker as years advance, often from around the age of 30.  Aged Ada, who is by no means stupid, may have considerable difficulty in memorising methods.

Older learners are frequently people who have held responsible jobs and are used to managing their own learning by their own tried and tested methods (which they must be allowed to follow).  It is difficult for them to be beginners.  Frustration is common and self-esteem is easily knocked.  Also, teachers must take care not to patronise them.

It is vital that a calm, reassuring atmosphere is created by the teacher.  Older learners can appear especially anxious – worried they will go wrong, worried about letting others down, worried about hurting themselves, worried they just can’t do it.  Anxiety leads to panic and in panic mode the brain sets physiological systems into “flight mode”.  In this, visual attention is narrowed down to focus only on what is immediately ahead and verbal instructions cannot be taken in.  This sequence of involuntary, instinctive actions is one reason why “scary” teachers are no help to so many ringers.

Ada often feels that as soon as one ache grows better, another takes its place,  First her knee hurts so much that climbing the stairs to the ringing room is a real effort, then it’s her shoulder, making ringing impossible, then her wrist, then her back.  Depending on the root of the problem, ringing may ease back ache, although if it makes it worse, she should desist and, obviously, serious, chronic pain should be referred to a professional.

Strains and sprains, cuts and grazes all take longer to heal so the older learner may, quite rightly, be more cautious and should be treated with the greatest of care.  Teachers should also be aware that, because of a natural reduction in flexibility of the wrists, a great many older learners are not able to catch the sally in the traditional grip with the tail end in front of the sally (although those who developed the necessary muscles at a young age will not have this problem).  Good bell control can be achieved with many slight variations on the standard grip and teachers of older ringers should consider carefully how much emphasis should be put on achieving what is currently believed to be the best grip.  In all activities details of what is considered “best practice” change slightly all the time.

Ada and co. may also have one or more of the difficulties described in the next section.

Elderly Egbert learned to ring a great many years ago but he is beginning to feel that he is no longer the asset to the band he once was.  There are many ways in which he can be helped to continue to enjoy ringing and all that goes with it.  However, probably the two most important measures are for the tower captain to: a) Make it clear to Egbert that he is still highly valued, that he is not wasting anyone’s time and that every attempt will be made to provide any help he feels he needs in order that the standard of ringing does not suffer; he has only to ask. (And, of course, the tower captain should continue to observe him and, from time to time, ask if this or that might help.)
And: b) Make it clear to the rest of the band that Egbert is a valued member and any impatience or unkind criticism will not be tolerated.

Those who learned to ring in their earlier years will have developed “ringing muscles” and it appears that neither these nor technique is lost with age.  Ropesight, listening, rhythm and bell control will all have been habituated but illness and declining abilities may make Egbert wonder if his ringing days should be coming to a close well before there is a need for that.  Again, lighter bells and shorter periods of ringing may help and there must be somewhere reasonably comfortable for him to sit between spells of ringing.  When ringing for long becomes tiring, Egbert may, most usefully, stand behind learners.

What will actually be of assistance will depend on the individual but here are some suggestions to help various conditions:

Also arm, wrist or grip problems on one side only.  Many ringers could be helped until they feel confident ringing with just one hand.

If only one side of the body has been affected, again, working with that person until he or she can manage one handed will be beneficial, so long as he or she can stand (or lean) fairly steadily.  For a stroke victim, being able to continue ringing in some way could be very important for rehabilitation.  Even if it is only a few rounds on a Sunday morning or, perhaps, just managing backstrokes while an assistant controls the sally, it will be worthwhile.

Something as simple as asking other ringers to wear light coloured tops or putting on the ringing room lights could help here.  Arranging for sessions with a simulator is likely to help any ringer improve listening skills.

Hearing aids help some ringers but others find they distort sound or make the bells just too loud.  Clear verbal instructions, spoken slowly will help and, if the ringer has virtually no hearing, it is best for the conductor to be plainly visible to him or her.  While there is some hearing, using a simulator may improve rhythm and give confidence. 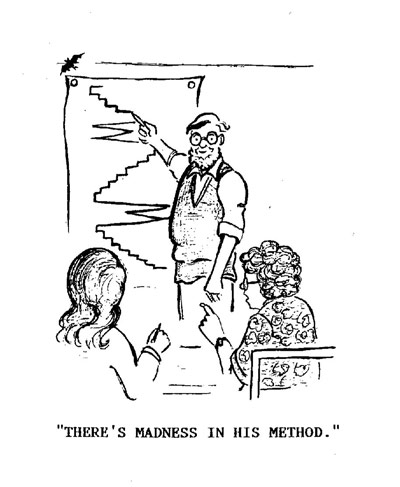 Extreme patience is needed if the same question is asked over and over again or what has been achieved easily in the past now appears to have been forgotten.  Irritation or any sign that a question has already been answered must be avoided.  It may become necessary for someone to stand with the ringer to remind him or her what to do next and the person in charge should be aware these ringers may try to do something inappropriate, such as volunteer to ring a method which they no longer remember or have never known, and be ready to steer them gently into something else.  There are also many older ringers who, as soon as they forget anything, believe, fearfully, this is the start of dementia when it is not.  They need reassurance.

As with all teaching, good communication with the pupil and creative thinking are the keys.

Of course, the time may come when Egbert really does need to give up but don’t hurry it on.  Remember, Elderly Egbert has a wealth of experience and experience is a valuable commodity.
In general, older ringers are reliable and can be depended on to turn up on Sunday mornings and for practices.  Often they are good company and the social side of ringing is a plus to them so they may be willing to help with administrative matters and they will keep your bells ringing.

Cartoons reprinted from "Learning The Ropes", by kind permission of the author, Barbara Martin from Salisbury.