In the Clock Chamber is an unusual Chiming Barrel, installed in 1788 during the incumbency of James Bailey.  It was set to play popular secular tunes of the time, and became known as Bailey’s Fiddle.  These tunes were later changed to seven new tunes, one for each day of the week, played at four-hourly intervals.

Older residents may remember them; they included Home Sweet Home, Ye Mariners, I love Jesus, The Last Rose of Summer, and on Sundays, O Worship the King.  The melodies have not been heard for many years, due to the breakdown of the mechanism and the inability of anyone to master its intricacies in order to repair it.

Notes by Evelyn Friend, an Otley ringer, who remembers it being in working condition when she was young.

2 The Last Rose of Summer 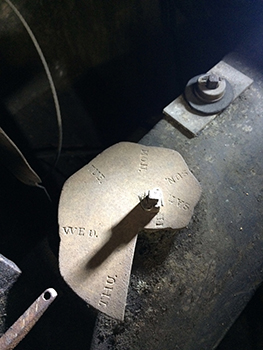 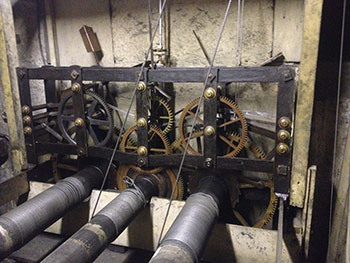 The chimes stopped in 1960’s  because they were worn out through age and use.  The metal parts catching the hammers were so worn that the notes didn’t sound any more.

The chiming barrel appears to be able to be wound from the floor below, ie from the ground floor in the church, at the foot of the tower, where there is a store room.    But I think it can also be wound directly from where it is sited in the clock chamber.

The redundant hammers were removed from the belfry during the refurbishment of the bells, but are being kept in the hope that they may be reusable.   There is still one hammer on each of bells 3, 6 & 8 for the clock chimes.

A local friend of the ringers is currently very interested in restoring the whole thing.  We have asked the PCC if they are happy for us to go ahead with a feasibility study.