The Etiquette of the Outing

By Gordon Rendell from Montacute


Imagine you are not a ringer, difficult I know, but try. You live in a secluded village in the countryside. Perhaps Hardington or even Montacute. You’ve friends down for the weekend who you haven’t seen for years and it’s a beautiful day. You’re out on the patio with the brolly up and a bottle of Pimms No 1. What could possibly spoil the serenity of the moment except perhaps a thunder storm, but there isn’t a cloud in the sky and the nutter next door broke his lawn mower yesterday. 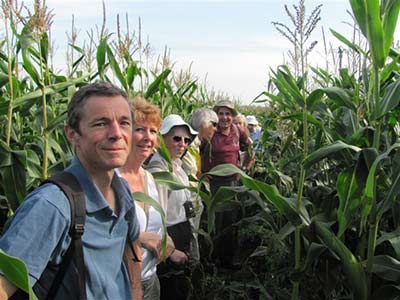 Ilchester Branch members chose the hottest
day of the year for their walking outing!

Then it happens, a convoy of cars comes roaring up the lane and draws up outside with tyres locked on the roadside grit and a generous slamming of doors. You can always tell the car owner because he goes around slamming all the doors again to make sure that they are quite shut and then there is a chorus of hoots and squeaks as the immobilisers are activated.

Next we hear an odd jangle of various bells being rung in order to find out which is the Treble followed by a cacophony of sound produced by an indifferent raise. If that assault on the eardrums was not sufficient we next have to suffer far from perfect “Rounds and Call Changes” for the learners. By this time it is obvious that a bunch of loonies, or at worst vandals, have invaded the tower and one reaches for the telephone to have a word about it with the Vicar.

Lets rewind a bit shall we? We as considerate ringers would never do this I’m certain, for we are totally aware that we are invading someone’s space. It’s their village, they live here and rightly expect any “foreigners” to treat them and their surroundings with care and respect. So a few handy hints or reminders as to how we should go about this.

First of all if not met by a local ringer first check for clock hammers, then to find the Treble catch hold of two adjacent ropes, one in each hand and pull gently. I say gently because the bells may be up. When you find that the rope in one hand moves much more easily than the rope in the other then you have probably found the Treble and the Tenor. Now don’t necessarily pull the bells up with the first bunch of ringers that come through the door, if possible wait until you have a band that can do the bells justice. Best of all, approach your ringers before arriving and select your team by saying “ Fred, will you raise the fourth at the next tower please” and “ Tim, we’ll need you on the Tenor.” It causes the least embarrassment this way.

Now that you have achieved the perfect raise you carry on in like vein and choose a band to ring a well struck touch of something not too difficult so that the striking is as near perfect as you can make it. Then you can have your learners; one at a time is ideal. You’re basically on a tower grab so no one expects to ring all the time and they are much happier if they have had one good ring, accompanied by a glow of success, than two or three indifferent attempts. Let’s go outside a minute to see what is happening.

Our friends in the garden have stopped talking when they hear the bells going up, no doubt in trepidation of what was to come. First impressions are vital.

“We’ve got bells near us,” says the visitor in a consolatory tone of voice. “Enough to drive you daft sometimes.”

Then as the exhibition touch is in progress, “ But your ringers are a lot better than ours though.”

“I’m glad you like them,” replies the resident, taking advantage of the situation.

“I arranged it to welcome you especially.” Cheeky devil! 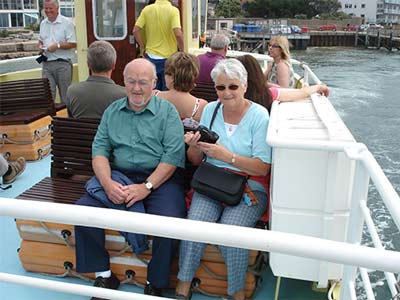 The friends carry on talking and don’t notice the odd slip or two, for one only really reacts to the breaking of the silence in the first place.

But still try to keep the standard up. It’s an outing, not a practice and should be treated as a striking competition.

Bad ringing, listened to outside the tower is intolerable and the reason for most complaints.

You’re on show, so to speak, don’t give anyone the impression that you’re not as good as you really are. So only ring things that you are really sure of, and conductors, if it gets woolly call it round and start again. Don’t allow it to die an agonising death.

You’ll only get the best music by orchestrating it, not by allowing a “free for all”.

Don’t forget the lower. If it’s a good one your residents may not even realise that you’ve stopped ringing and left the area.