A Cure for Ringing Panic?

“Whatever is there to be anxious about”? This might be a very normal reaction by those outside of the ‘exercise’, as we call ringing and associated matters in general.
‘Ringing panic’ is a universal phenomenon to all who ring, at any level from absolute beginner to expert method ringer. It knows no boundaries and affects all who catch hold of any rope at any time about to ring at all, despite how confident you may think all the others in the circle may look. Some factors increase this sense of stress, such as ringing at a different tower or amongst folk one doesn’t normally ring with. At other times it may be attempting to ring a complicated piece at the very edge of one’s abilities. For the beginner it is just a matter of how many times can I pull on the rope before it gets out of control? In addition one feels a sense of responsibility towards the other band members ringing as much as to the reason for ringing, being a service or just a simple practice evening. These, and a myriad of other factors and thoughts, crowd the mind as one is about to ‘pull off’.

Is it such a bad thing? Some say a little adrenalin can help to improve the performance, while others find it acts as a complete inhibitor to ones abilities and performance, so much so that the knees literally begin to shake, the palms get sweaty and the pulse races uncontrollably.

It just happened out of the blue at a tower practice a couple of months ago. Someone mentioned “we’d try Beverley” or some such surprise method. As I was hanging on the treble sallie waiting for the opportunity to begin, amongst the usual chatter before any ‘tricky’ method is rung, the use of that particular phrase brought to mind some words of Mark Knopfler. Many may not be familiar with this icon of popular music over the last 30 years, a majestic multi-talented musician by any standards and probably among the top three or four greatest blues rock guitarists of all time, but that really doesn’t matter in this context. 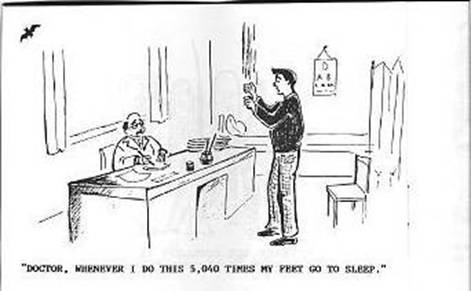 Cartoon reprinted from "Learning The Ropes", by kind
permission of the author, Barbara Martin from Salisbury.

I was at a concert he gave two years ago in the Albert Hall. In introducing a number that he said they hadn’t played recently, though I don’t really believe that, he said, “Anyway, we’ll try it. That’s all it is; it’s an attempt. Its never a done deal” He went on to add that, “When I’m in the theatre, at plays, Shakespeare and so on, I often think it would be a good idea if an actor were to come out on the stage at the beginning and say something like, “Good evening ladies and gentlemen. Tonight we’re going to have a swing at Macbeth, or something like that. Because that’s all it is, just an attempt.”

So, next time you have a dry mouth, butterflies and trembling hands as you hear, “Look to…” just take a deep breath, try and relax and think, even for the best ringers in the world “this is just an attempt, its never a done deal.” It might just help a bit.

Sometimes we all get too close to the trees and cannot see the wood.