THESE ARE YOUR SIX STAGES:

6. Put it all together 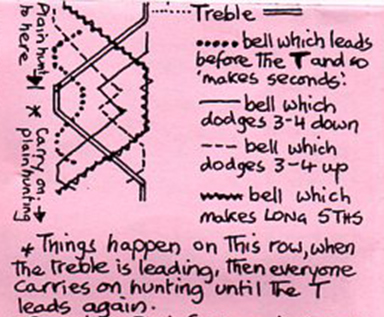 2. Four Pieces of Work to Learn and Practise Individually.

In the plain course there are four pieces of work. You must learn them all very thoroughly. 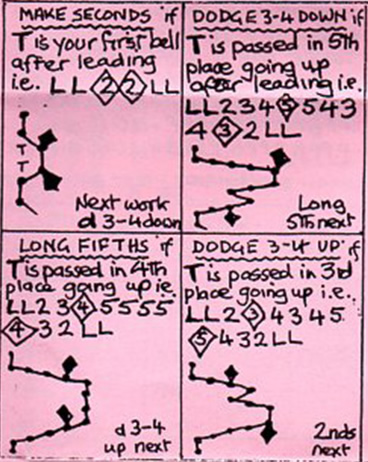 Here is an exercise to practice just one piece of work at a time. It's called "Nervous Breakdown Bob Doubles"!

Now you know the four bits of work so you can ring a plain course.

All the working bells (2,3,4,and 5) do the same work in the same order but each starts at a different point. Try bell number 3 to start with. Here is the line for you: 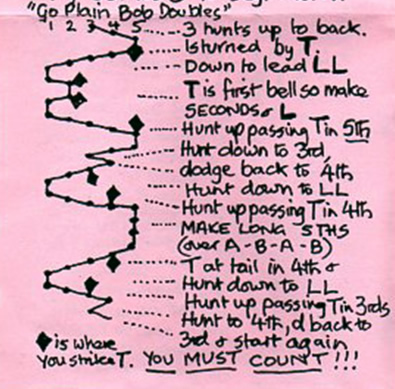 Bobs can be called to extend the ringing longer than the plain course.

A bell which has a regular, simple path is called the "Observation Bell", because the conductor can use it to see where to call the bobs.

YOU can ring this Observation Bell, no problem, (so long as the conductor calls it correctly for you!)

In effect you will just ring three plain courses with the following differences:

The plain course is only 40 changes, but there are 120 possible different rows (called "the extent" ).

So another special change (called a BOB) is used when the Treble leads, to produce more of the rows.

A Bob is called when the Treble is in 2nd's place (backstroke) just before leading and it takes effect at the next backstroke (sometimes called tailstroke), so you have just two seconds to react to this instruction!

A bob actually affects three bells - it switches them around so that A goes onto B's path. B goes to C's path and C goes to A's path.

So three bobs, correctly placed, will cycle these three bells round and back onto their original paths and so back to rounds. 3x 40 (plain course) = 120 (extent.)

The other bell is not affected and just rings three plain courses (Observation bell). 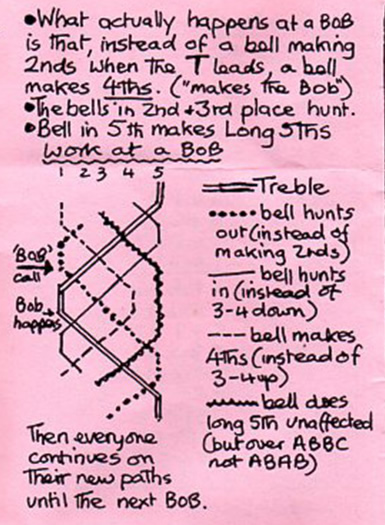 BOBS - four pieces of work to learn and practise individually. 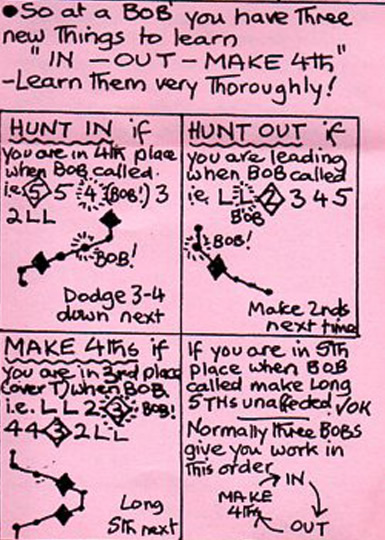 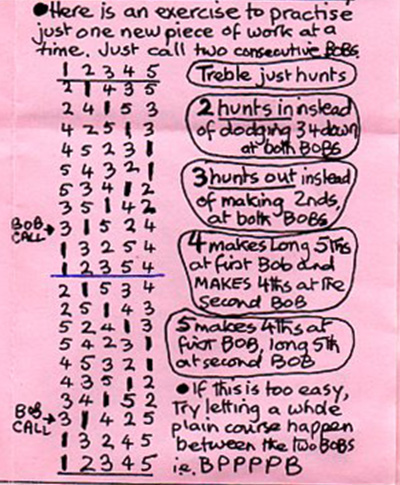 6.Putting it all Together

Now you know all the bits of the 'jigsaw' which is Plain Bob Doubles.

You can do it on any bell but you may have to learn the starts.

All you need to do is to memorise the following two charts - they cover every eventuality for plain leads ( no call) and for bobs. 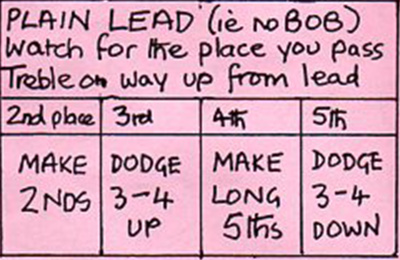 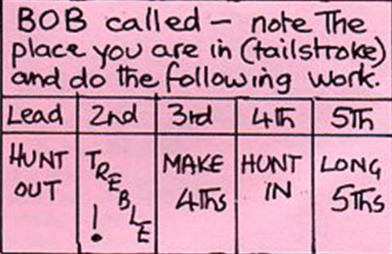 Here is the full line for 120 Bob Doubles on the 3, when the Observation bell is the 2. 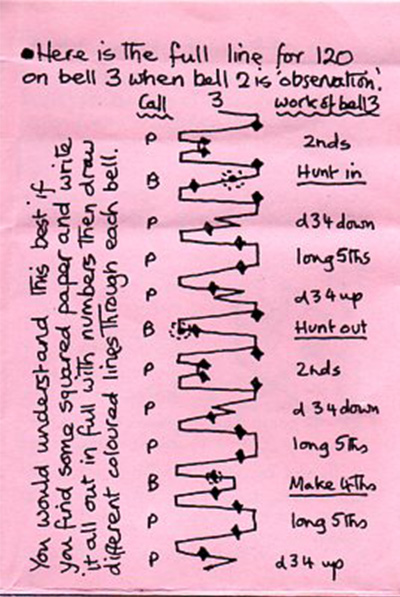 When starting to learn to ring methods, many learners often get 'bogged down' trying to absorb too much information. This mini leaflet gives youjust the bare essentials and is best if you tackle each stage in order.

Each stage builds on the ones before.

Your Tower Captain should arrange the ringing to suit each stage for you.

If you cannot understand any part, ask someone for help!

Study each section at home first and COUNT, COUNT, COUNT your places saying where you pass the Treble.

This must become automatic! (Other ringers may look as if they're half asleep, but they are counting silently.)