Friday 17th March 2000.  A Friday morning that started out like many other Friday mornings. After Derek Beaufoy retired from the Southern Electricity Board, he and his wife Helen, organised ringing for their similarly situated friends and some fortunate enough to be able to escape from work for an hour or two, at various towers in the area.  Sometimes the ringing was followed by coffee and cake at one of the ringer’s homes, or if further afield, we might take lunch in a local hostelry.  All together it was a pleasant way to spend a morning and an opportunity to ring methods that one couldn’t as a general rule find anyone else to ring them with. 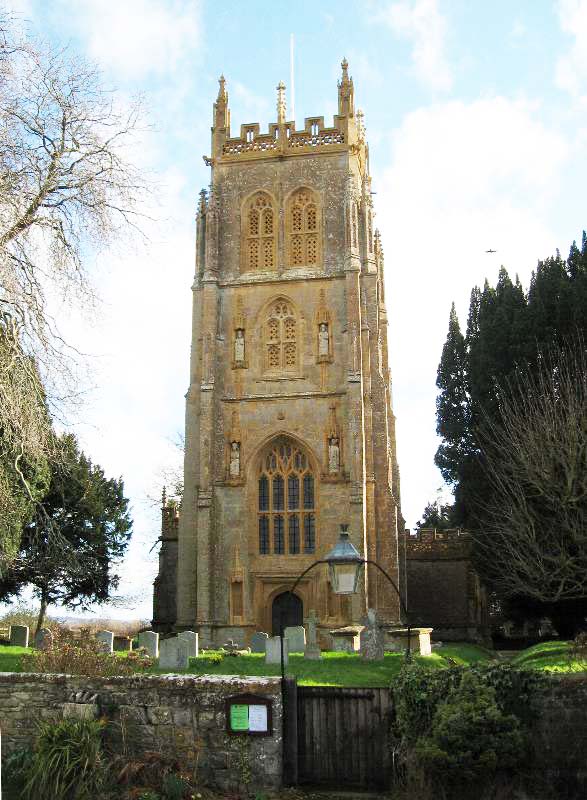 This particular Friday morning we met at Isle Abbots.  The bells had recently been re-hung and a new Treble added to make them up to a six.  Local knowledge has it that the bells were never rung during the whole of the twentieth century and as a result the frame and fittings were completely unusable and it was only with the availability of a Millennium grant and the efforts of Walter Ashford that a re-hanging project was undertaken and made possible.  The church itself is a beautiful building with some exquisite features and completely unspoilt by the Victorians.  It has one of the tall, decorated, fifteenth century towers, common on the Somerset Levels.  We had been there approximately half an hour when a gentleman unknown to us entered the ringing chamber situated half way up the tower.  He spoke to Walter Ashford who had come to let us in and ring with us.  Walter excused himself and accompanied the gentleman down the stairs saying,“ Prince Charles’ Secretary is downstairs and I must go and speak with him.”  A fairly normal occurrence, we thought, as we were in Duchy of Cornwall country.  Prince Charles had, as it happened, shown interest in the re-hanging of the bells.
When Walter returned, he announced that Prince Charles was downstairs as well.  It seems that he had come down to present one of his tenant farmers with an award for conservation.  Apparently, Mother didn’t want mucky boots all over her carpets in The Palace and suggested that he brought the award down to the farm.

Having heard the bells ringing and previously showing an interest in them, he would like to come up and watch the ringing in a few minutes.  What can one do in a few minutes?  No time to rush home for suits and ties.  He would have to take us as he found us, so we carried on ringing until he arrived, with the gentleman whom we had seen earlier, plus his secretary and a photographer.  The first gentleman introduced Prince Charles, which I found amusing.

“ Yes.”  I said, “ We recognised him.  Good morning Sir.”  We introduced each other and he very quickly put us at our ease going around shaking hands with everyone.  H.R.H. was obviously no newcomer to this situation and chatted to all of us.  Roger Fox mentioned that he had rung for the wedding of Prince Charles’ parents in 1947, as had several of the rest of us.  Peggy Godley from Yetminster, a nonagenarian, was asked how long had she been ringing. “ Only sixty years,” she replied. 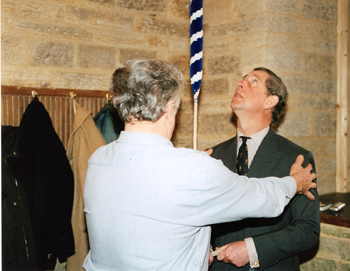 All seemed to be going well, just like a Royal visit on the television, when someone in the royal party spoke. “ Would you like a pull, Sir?”  ‘What idiot said that?’ I thought and I could hear the sharp intake of breath from the other ringers?  I prayed that he would graciously decline the suggestion.  My prayers were not answered on this occasion. “ Yes, I think I would.”  To coin a phrase of one of his illustrious ancestors, “We were not amused.”   Then everyone looked in my direction, sort of expectantly.

I enquired as to whether he had ever rung a bell before, perhaps when he was at university?  I’m afraid I didn’t quite catch the reply, but I thought he said that his sister had done a little bit to it.  He was wearing a very nice suit, which fitted well, and I was certain that his tailor hadn’t allowed for the arm movement required for ringing.  But what was the protocol? I felt nervous about asking him to remove the Royal Jacket completely, feeling certain that it was not the done thing.  So instead, I suggested that perhaps he would like to undo the buttons in case they, or the sleeves, came off.  He dutifully complied with my advice and I steered him towards the rope for the third bell.

He was completely submissive when I grabbed him by both shoulders and placed him exactly where I wanted him to stand, with me with my back to the centre of the circle of ropes and his rope between us.  He probably didn’t even notice what I was doing as he was staring intently, somewhat nervously at the hole in the ceiling where the rope disappeared into the darkness.  He appeared to be thinking ‘will I go through there?’

“ Now, Sir.  I know you play golf.” “ Not very well, I’m afraid.” “ That doesn’t matter, you haven’t got to hit anything.  Hold the rope like this,” and I wrapped his hands around the tail end of the rope.  “ Now relax as though you are holding a Putter.  I don’t want you to do anything else.  The bell will pull your arms up and I shall pull them down.  That’s all there is to it.  You haven’t to worry about a thing.  I’m the one doing the worrying, that’s my job.”

I was thinking that Charles I was beheaded; there was no way that I was going to have Charles III hanged at Isle Abbots.  We’d have been in all the papers.  So we filled in for a few rounds.  I pulled off the hand stroke and guided his hands up and then pulled them down on the backstroke.  He quite quickly found out how hard to pull and was soon managing the backstroke on his own.  A couple of minutes of that and I thought I had pushed my luck far enough and called “Stand.” 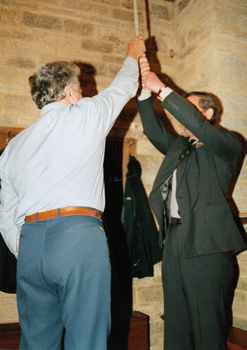 “ Thank you very much.  I enjoyed that,” he said.  “ Perhaps you would like to ring something properly now?”  He sat down on a bench against the wall and before he had a chance to cross his legs, was told politely by Helen to keep both feet firmly on the floor so that there was no chance of a rope getting wrapped around them.  He sat bolt upright with his hands on his knees and behaved himself very well.  So we entertained him with a hundred and twenty of Stedman Doubles, which was really quite excellent considering the pressure that we felt subjected to.

All too soon the visit was over and he departed, much amused by my query as to whether we qualified for a “By Appointment” seal of approval if we taught him to ring. “ A Royal Warrant?” He laughed, thanked us all for allowing him to intrude on our ringing and bade us all “ Good Morning.”

I regretted afterwards not having rung the Tenor with him to a plain course of something.  He would have gone away with an even greater sense of achievement.

Shortly afterwards I made several telephone calls to try to obtain copies of the photographs of the event and eventually ran them to earth at the Duchy Office at Newton st Loe.  Derek and I went up to see them, where we were given a contact strip of all the photographs that had been taken on the day for us to order our requirements from.  There were fourteen of the ringers and ringing, so we all had something to commemorate the visit, including one for The Ringing World, which was published with a short account of the event on 14th July 2000 on page 705. 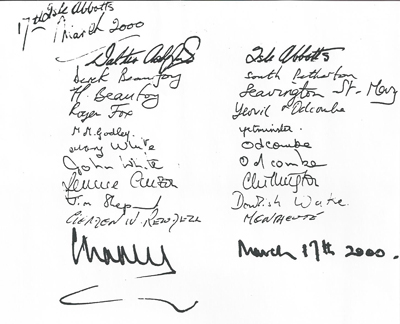