George Bernard Shaw said: “He who can, does. He who cannot, teaches.” This is demeaning to teachers (not to mention women), suggesting that imparting knowledge to others is a second-rate occupation and gives no consideration to the skills required of a good teacher. Here, and in subsequent chapters, the word “teacher” is used to describe anyone in charge of a ringing session where a less experienced ringer or ringers, under the “teacher’s” guidance, tries to learn or improve a ringing skill or method. “Learner”, “pupil”, “beginner” and “novice” are used interchangeably to denote anyone learning or attempting to perfect any ringing activity, with the help of a “teacher”. In practice, almost all examples are taken from initial bell-handling up to Bob Doubles. In the earlier stages teaching is almost always one-to-one. Once a beginner can ring rounds, the teacher will be dealing with a group although actual teaching is still very frequently one-to-one, but with onlookers. If several learners happen to be at the same stage, group teaching may be taking place. The general principles for teachers put forward apply to all these situations. However, a later chapter will offer extra hints on management of a group.

“Doing” and “teaching” are different activities and each, done well, demands a high level of skill. In ringing, however, it is very often the people who “can” who are called upon to teach. Frequently, the most experienced and most able ringer in a band is the tower captain. Equally often, it is the tower captain who, in the best interests of the Exercise, teaches any new recruits, young or old (or in-between). While a highly capable ringer may also be an excellent teacher, this is not always the case. And a major reason for this is that he or she may never have given much thought to the process of learning. 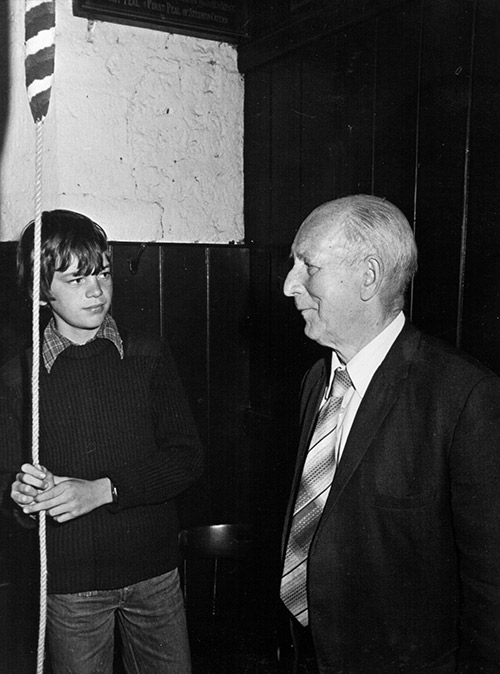 In addition, the experienced ringer may well set out with two possible handicaps:

Firstly, this experienced-ringer-turned-teacher (hereafter known as e-r-t-t) thinks to himself or herself, “I know all about ringing so that is where I’ll start,” and so becomes what, in educational circles, is termed a “subject-based” teacher.
Secondly, the chances are that our e-r-t-t learned to ring a great many years ago, probably as a child, and took to it easily. Typical beginners’ problems have been forgotten, if, indeed, the e-r-t-t ever suffered them at all. An e-r-t-t may not be the best person to empathise with a nervous, frustrated learner.

It has long been considered by the majority of modern, educational organisations that the most productive – and enjoyable, for both pupil and teacher, – approach to teaching is the “pupil-centred” one. A “subject-based” teacher is someone who sets out merely to impart knowledge of a subject, regardless of who may be trying to learn it. He or she is bound to be a dictatorial, inflexible lecturer. “Do it as I say, don’t argue. If you’d listened properly, you wouldn’t need to ask questions.” Education – a word which comes from the Latin “e”, out of, and “duco”, I lead – should be a drawing out of ever increasing understanding of a subject, not a hammering in of facts.

The “pupil-centred” teacher attempts to see the lesson from the pupil’s point of view. At the end of Harper Lee’s wonderful book “To Kill a Mockingbird” eight year old Scout, whose life has just been saved by a recluse she had believed to be a monster, recalls a piece of advice her wise father, Atticus, had given her:

“Atticus was right. One time he said you never really know a man until you stand in his shoes and walk around in them.”

This, metaphorically speaking, should be the aim of a good teacher, to put him- or herself into the position of the pupil and to see the lesson through the pupil’s eyes. How can the ringing teacher do this?  By not only demonstrating to pupil ringers but also asking them questions, how they feel, how they see things and, most importantly, listening to their answers and ideas. Pupils may ask about or comment on aspects of ringing never previously considered by the teacher. In this way pupils increase a teacher’s awareness and knowledge of their subject, for, as Joseph Joubert said (“Pensees” 1842):”To teach is to learn twice.” It will help too if the teacher feels a genuine interest in the pupil (not just in his or her ringing progress) and gets to know “how the pupil ticks”. Then learning to ring will become a joint process. The learner should trust the teacher and know that he or she is respected by the teacher. There should be constant communication, by word, gesture or expression. The teacher should discuss progress with the pupil, asking what he or she thought went well or badly. If at all possible, the teacher should find something to praise at every practice. Of course, the teacher must say what could do with improvement and, if possible, make suggestions how the pupil can achieve this, but simply pointing out a pupil’s faults will soon lead to reduced motivation and, subsequently, little progress.  Constant criticism, which is less than constructive, will cause pupils to become depressed since they will feel that, however hard they try, they cannot reach the required standard.  Frequently the teacher’s best plan is to point out just one fault, ignoring other less than perfect aspects of the learner’s ringing. Realistically, that is probably as much as the pupil can hope to deal with. On the other hand, setting standards low will inevitably result in poor ringing.  It is a delicate line for the teacher to tread.

Ringing is a complicated and difficult art and none of us will ever reach perfection but a flexible, relaxed teacher who tries to put him- or herself into the learner’s position will increase motivation and good standards will be achieved.

Ideally, the teacher should feel pastoral towards pupils, with a knowledge of the person beyond bellringing activities. It is useful for the teacher to have an awareness of any personal circumstances – family problems, illness, bereavement, for instance – which may affect performance. Obviously, battering a new recruit with barrages of questions is unlikely to do more than make that pupil ill at ease and unresponsive. The mutual trust and respect which is desirable between pupil and teacher is best built up gradually through social contact outside ringing sessions. It is prudent to make sure these social events always involve a group as awkward situations can arise. Some new ringers may arrive with a deal of emotional baggage and, given encouragement, even if unintentionally, may attempt to share it with the unwitting teacher, becoming an embarrassing, time-consuming nuisance. It should be clear the teacher is only trying to get to know new recruits, not inviting them to join the family. With adults it is usually easy to invite two or three along for coffee or to join the gang in the pub. The lone young person is more difficult but he or she may appreciate being taken along to special meetings or being given a particular job, such as taking the register or organising the notice-board. If there is a group of young ringers, organise extra social activities for them – a barbecue, a visit to a swimming pool or funfair, whatever they choose.

In my forties, while working full-time in a secondary school, I started to take piano lessons. For the first time in many years I was trying to acquire a skill which involved learning physical movements to which I was not accustomed, coupled with understanding a great deal of new “language” (both written and spoken in the case of music!) I did not always realise straightaway what my teacher meant; certain movements, which he seemed to think were easy, I found very hard. Of course, I went to piano lessons because I wanted the experience of playing a musical instrument. The spin-off, however, was that I became a better teacher, far more able to empathise with pupils who seemed unable to grasp what I was getting at in lessons, nor to remember it at a later date. In an ideal world, all teachers should try learning something new on a regular basis, just to remind them how difficult it can be to master a new skill or fresh concept.

In my opinion, there are two golden rules every teacher should follow:

There is always more than one correct way to teach anything.