Putting Out The Fire!

This is one of the excellent games devised by The Whiting Society to aid bell control and to introduce the concept of ringing by Places rather than numbers. There are loads more good ideas on the Whiting Society's website: http://www.whitingsociety.org.uk/

It is strongly recommended that this exercise is carried out with the bells silenced to the public – it makes an unholy racket. Each “go” lasts less than a minute, so a short sesssion can be quite valuable. The overriding objective is to get the student thinking in terms of “place”, rather than “bell number”, and ultimately to be able to see what place he is in from the fall of the ropes.

Select the six ringers to participate, and allocate each a bell, one to six. There’s no particular need to load the band with experience; it’s better to let more students participate. No one outside is going to hear. Each ringer draws a card, face down, from the pack of six lottery cards, and doesn’t let the other ringers see which one he has. The instructor privately views each student’s card, and makes a note of who has what. The students then take hold to ring, taking the ropes they were allocated by the instructor at the start. The numbers on the cards refer to the place each must ring in, not the bell number! 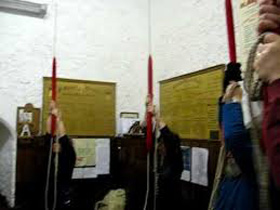 One student must have the “Lead” card. He says, “Look to: going: gone”, as usual, but this time all the bells are pulled off together, and the first objective is to achieve perfect firing – all the bells sounding simultaneously. This is valuable in itself, because it demonstrates the longer turning times of the bigger bells, and how the ringers have to adjust the “visual” pull to accommodate this.

With practice, the students will acquire the skill to put their bell in the correct place without knowing in advance which bell number to follow, and the exercise will prove valuable in weaning them off the obsession with following a “Bell Number” which is a consequence of calling call changes by bell number. Used in conjunction with other exercises, it helps them to develop ropesight.

To use these techniques, you need to have sensors installed on your bells, and simulator software in use. Both Abel and Beltower are excellent packages - follow the links and take a look.