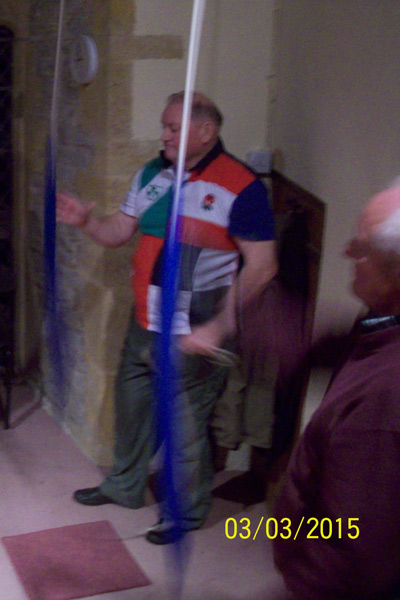 Something that I can never understand is why some ringers seem to be unable to recognise that the striking is uneven.  If there are six of you standing round a table looking at a freshly baked cake, (preferably a circular one) and the host starts cutting the cake into six pieces, everyone can immediately see if someone is getting a bigger piece than they are.  So why can’t they hear if someone is making a bigger gap than the others are?  Listen to the time space between the beats of the Tenor, divided it into six, and put yourself on the appropriate division.

Right, you’ve done that?  Now remember that going up is the opposite of going down, so as you finish a lower with the bells ringing quickly and close together, that is how you start a raise.  This applies especially to the ringer of the Second.  Don’t leave the same space between yourself and the Treble that you do when ringing Rounds on raised bells.  That’s much too wide and the chaps on the back bells will be pulling their arms off trying to get up over you.  For goodness sake, LISTEN TO THE TENOR.  You’ve got to get all the bells in between his strokes.  A bell is controlled by gravity and, like a pendulum, it swings at a fixed speed.  As the Tenor ringer is the one that is most disadvantaged by the power / weight ratio, he is the one who is right.  Everyone else rings at his speed.

No, treble ringer, I have not forgotten you.  Get your bell up fairly quickly, with the rest following you closely, because when your bell starts to speak at backstroke, it’s got to be after the Tenor, not in front of it.  Then you hang around for a bit, keeping both strokes after the Tenor, until all the bells are speaking both sides.  Then, up you go, without leaving anyone behind.  You can only raise altogether if you keep up with your weakest member.  So it takes a little longer, so what?  It’ll be worthwhile.