There is much useful information in the Sherbourne little yellow and blue (follow on) books. What follows might amplify the advice given in these books.
I don’t know how many times I have raised in peal when we have started really well. The initial chiming on the bottom is fine but as the treble ringer leading up gets higher somebody gets out of place, usually because they are not pulling hard enough! 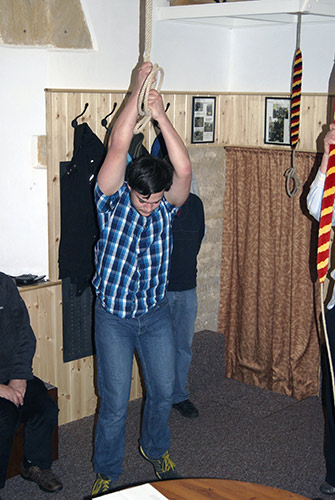 What we have to remember is that when we pull a bell up we are raising about 6cwt of metal through at least 3 feet. This requires some effort, and the amount of effort increases as you get the bell up to frame height. This is where you have to do the most work. You have to pull quite a bit harder than when you first started on the bottom. It’s to do with Newton’s invention!

I would suggest that, if anything, you over-pull slightly as it is easier to correct a slight over-pull than an under-pull, which leaves your bell dropping in too soon. Yes! You have to work! Bend your knees, if necessary.

If you find that you’re ringing too late, then pull slightly less hard until you’re nearly back in the right place. Don’t over-correct. Resume pulling harder before you get back to the right position. Otherwise you’ll find that your bell has dropped in and you are now striking too soon. Let out a coil when it’s tight round your hand, not before or you’ll have too much rope.

As you reach the top, getting near the balance you don’t have to work so hard. Now’s the time to pull a bit more carefully, or you might whack the stay. Not good!

It might help you to think of going up a path which slope up gently, then becomes much steeper, and then levels out again as you reach the top.
You don’t need to do 40 press-ups before raising a bell but it helps to be aware of the mechanics. However, if you’re new to this then try to avoid the sociable bells. They’re the ones that just like to drop in (feeble joke).

P.S. The Devon and Bristol Raise: There are generally two ways to start a raise in peal. The more usual, Bristol way is: 1, 1 2, 1 2 3, 1 2 3 4 &c whereas the Devon way is that everybody pitches in on (usually) 3:  The conductor says: “one, two,” and everybody pitches in on three. This should result in perfect rounds if you all get it right or “Kerrlangcrash” if you don’t.  This method might not be suitable on heavier bells.