Leaflet To Be Distributed To All Towers!

When Tom Harris answered the doorbell one day, he was surprised to find a complete stranger on the doorstep.  The lady turned out to be the late Arthur Reed’s niece, from Crawley, who was wondering what to do with Arthur’s ringing books.  She had looked up Tom’s address and decided to pay him a visit. (Tom is the current Tower Captain at Staplegrove, where Arthur was Captain years ago.)  How lucky she did, as it is a fascinating collection, and it could so easily have ended up in the bin.  Now it is hoped that it can all be found a permanent home in the Association library.

Within the books, literature and pamphlets of this archive there is this small 8 page A5 booklet written by Charles H Shearn of Midsomer Norton. The date of printing and publication under the auspices of the B&WDACR by Cave & Cave, Commercial and General printers of 25 Victoria Street, Bristol, is not stated, but probably happened in the first half of the 20th C, if not earlier. 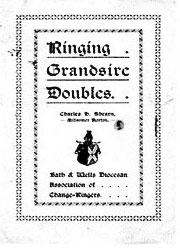 At the very least the introduction is worthy of visiting and record.

"In order to further the art of Change Ringing, and to promote a lively interest in their work, this short treatise is written, that those Ringers who hitherto have contented themselves with round ringing and a few set changes may with greater enthusiasm do their small part in the work of the Church. Ringers often relapse into a state of half-heartedness regarding their duties, mainly owing to a lack of interest in monotonous work; but if Change Ringing be practised in the right spirit, that work will become a pleasure and benefit to all. It is intended that this pamphlet shall be sent to all five and sixbell towers in the Diocese of Bath and Wells, some of which have not been visited by members of the Association, owing, perhaps, to the fact that they are situated in remote country districts, or from other causes. It is most sincerely hoped that each Ringer who reads this will try to become a proficient member of the Association, whereby he may set a better example than before, remembering that he cannot do too much good of the Church.”

Then set out is the whole of Grandsire Doubles from the plain course explained with diagrams, through bobs and singles, to calling a ‘six-score’ or 120 as we now know it, all in only four sides of A5. That’s the way to teach them! Those were the days. My problem, particularly with the brevity of this pamphlet, is that you really need to know how to ring a touch of Grandsire in order to understand the text!

When Michael Horseman was researching for his book "The Bath and Wells Association of Change Ringers - The First 100 Years", he came across several references in the Frome Branch minutes to obtaining copies of the "Shearn Pamphlet", as if it was an important local ringing bible.

Michael then did some research and this is what he discovered:- "Charles H. Shearn was a ringer at Midsomer Norton and is first noted as a member there in the 1898 report book. He must have been a bit of a ringing whizz kid as he rang three Peals for the Associatioin (Minehead in 1900, Frome in 1902 and he was the conductor of the first Peal on Midsomer Norton bells on December 31st, 1904.) I don't know how long he was at Midsomer Norton, but he certainly only ever rang the three Peals listed for the Association - until 1929 they used to publish a full list every year of all the people who had rung an Association Peal and how many.

I see that the booklet was printed by Cave and Cave of Bristol. Both Bill and his brother (whose name I don't know) were quite famous ringers round the central Bristol area and I believe they were based at St Stephen's. They used to print ringing literature for various organisations".