Soundweld specialises in the repair of cracked bells and is proud to be the only one of its kind in the UK.  Having visited their website and been fascinated by what they can do, I asked Mark Strupczewski, one of the Partners, to write this article for us.  (This is the company that welded the cracked bell at North Perrott)

During the German occupation of Holland in W.W.II, many Dutch bells were confiscated. Many bells were found in the post war years but unfortunately most of them were cracked or broken. In August 1938, tests had been carried out by a Dutch foundry who used the manual metal arc process to repair and restore the bells. This process was later used to restore many of these bells.

In 1967 The Welding Institute at Abington carried out welding trials on cracked bells from this country and following the successful completion of a small-scale program, Soundweld was formed to carry out the commercial repair of cracked British bells.

To date some 550 bells have been welded and returned to service. The repaired bells range in size from less than a kilogram to three and a half tonnes with casting dates ranging from c.1150 to 1911. In addition to British bells, repairs have been carried out on bells from Ireland, France, Sweden and Malta.  Today, the welding has progressed to such a level that all cracks repaired in the bell are guaranteed for a period of 5 years from the date of welding. This would have been unheard of in the early days of welding, as it was quite common for the bells to crack again.

Cracked bells come in many forms:

The main form of cracking is in the crown of the bell and is caused by rusting expansion of the wrought iron cast in crown staple. This accounts for around 60% of cracks. Soundbow cracks account for around 35% of repairs. Causes for cracking include, but are not limited to, casting flaws, large indents at the point of clapper impact and incorrect hammer strikes.
Lastly around 5% of repairs are classed as miscellaneous. These range from missing pieces, waist and shoulder damage and bolthole filling.

A repair that is beginning to become more mainstream is that of clapper indents. Once the indent to a bell becomes more than 10% of the unworn thickness of the bell’s soundbow the bell should be turned so that the clapper strikes on a new unworn position. This is generally done once and is called quarter turning. The procedure can be carried out twice more and this is called eighth turning. However once this has been done the bell has really rung its last peal. Now however it is possible to weld the indents and in effect start all over again.

In today’s carbon conscious world the repair process is relatively “green” in that the electric heating method is one of the cleanest available and 80% of the lagging used to keep the heat from escaping from the welding rig is reused.

No matter which kind of crack is being repaired the procedure for the repair is as follows:

Upon receipt, the cracked area is cleaned and dye penetrant tested to reveal the full extent of any crack(s).

The crack is ground out and prepared for welding. Should the crack pass through the inscription / decoration of the bell, a plaster cast, rubbing, and photos of the original are made so that it can be faithfully reproduced after welding.

In the case of crown cracks in bells with their canons fully intact, we do not consider the removal of the canons to be necessary for a complete repair. This is assuming the bell is re-hung using boltholes and is not hung by its canons.Should the bell require turning after repair, the old unused boltholes will also be ground out to enable them to be filled.

The bell is then prepared for welding by placing it onto the welding rig.  It is then lagged up and heated. Once the bell is at the correct temperature the repair weld is carried out. When this procedure is complete the temperature of the bell is slowly lowered. When cool, the lagging is removed and the bell taken off the welding rig. All excess weld metal is removed and any moulding wires / decoration are reproduced. Two dye penetrant tests of the weld are carried out to check its success.  Upon completion, the bell is treated with a graphite type finish and prepared for collection.

The average time to complete a repair is around forty-five hours and uses on average 5 to 10Kgs of filler metal. The welding process itself takes around four hours to complete.

Photographs are taken during the various stages of the repair of the bell and copies of these are issued to the customer upon completion of work.

Soundweld’s commitment to ongoing research into bell repair remains as strong now as it was forty years ago and the development of the process continues to evolve. One of the latest investigations is into the possibility of Metal Inert Gas (MIG) welding of cracks. This would allow complicated cracks to be welded more easily than is the case today. 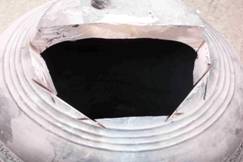 A bell from Stratton in Dorset before and after welding.