The Mystery of The South Petherton Bell Foundry Solved! (Compiled from notes by Christopher Green, who gave a talk on the subject at Petherton, soon after the excavation of the site.)

For many years it was known that there had been a foundry belonging to the Fathers family producing cooking pots at Montacute in the 16th, 17th and 18th centuries, but the actual site of their foundry has never been discovered. The mark on the Fathers family’s pots was three arcs. 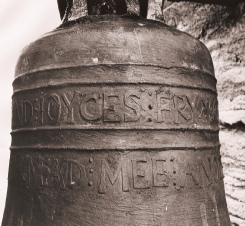 In Leicester Museum there is a pot bearing the name Thomas Sturton, and marked with four arcs. Nobody knew where Thomas Sturton’s foundry was, but it was realised that the marks and the pots of Fathers and Sturton were very similar. Perhaps the two foundries could be close to one another? A search through the parish records of villages near to Montacute eventually uncovered a family of Sturtons at South Petherton. There was no evidence that they were founders, but there were one or two clues.

Firstly there was a record in the Churchwardens’ accounts for 1719 that John Sturton had provided the bell brasses (bearings) for one of the bells. Secondly, the Hearth Tax records show that members of the family held exemption certificates. This tax was levied between 1662 and 1689, and anyone who had more than two hearths had to pay it. Bakers and smith’s had to pay it, but industrial hearths were exempt.

The next discovery was that the two families were related through the marriage of Mary Sturton and John Fathers in 1662. 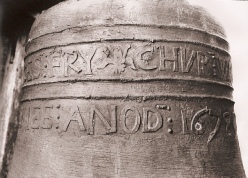 Then, in 2004, somebody digging their garden in Lightgate Road in South Petherton discovered some strange artefacts. A subsequent archaeological dig uncovered two pits cut into the bedrock. A large quantity of mould material was found, including pieces with the mark of William Sturton scratched into them, and one bearing the name Sturton. The South Petherton Pot Foundry had been found!

Amazingly, the relatively modern house now standing on the site is named “Sterton”! Apparently it was built on a field known as Sterton’s Orchard.

These foundries cast cauldrons, posnets and skillets. A skillet was a more modern version of a posnet. Both looked like a saucepan, but they had three legs, so that they could be placed on the hearth, in the embers of a fire. 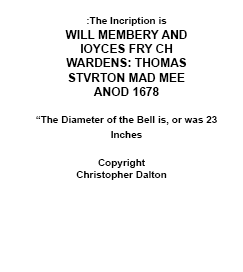 Of course, a bell is not very different in shape to a cauldron, and so it is not really surprising that pot founders often also cast bells. There are only two church bells that I know of that were cast by Sturton. One is at Thorne Coffin, and the other was at Cudworth.

Sadly it was the theft of the Cudworth bell, together with several others that were in Andrew Nicholson’s workshop for restoration that prompted me to write this article.

These pictures were taken by Christopher Dalton, and are included here by kind permission of Mrs Susan Dalton. Many thanks to Mrs Dalton, Roderick Butler and Chris Pickford for their help.