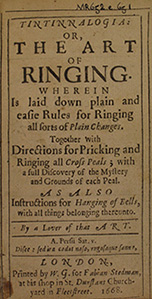 Fabian Stedman was born in 1640, at Yarkhill in Herefordshire.  At the age of 15 he went to London and was apprenticed to a master printer, and while in London he became a ringer.

“Stedman” is one of the very first methods that was ever invented.  We might never have heard of it, but for the fact that Fabian decided to publish some books about ringing.  In 1667, he was the publisher of the first ever book on change ringing, called Tintinnalogia.   Richard Duckworth wrote it and Fabian compiled and completed it.  A year later Fabian wrote Campanalogia, in which he wrote about his new method, “Stedman”.

Stedman was completely different to anything that had been rung before.  Until this was introduced, the most complex methods rung were Grandsire and Plain Bob.  Suddenly the ringers are asked to lead for just one blow, instead of two, and to lead at backstroke and handstroke, instead of the usual hand and back.  The plain course is much longer than that of the earlier methods, and introducing Singles extends it even further.  There is a lot of new terminology to be learnt, a whole new vocabulary of whole turns, half turns and quick and slow.

Stedman is a very useful method to know, as pieces of the work turn up in all sorts of other methods.  It’s also very handy when you are visiting a different tower and are being grilled to check that you really are a ringer.  If you say you ring Plain Bob or Grandsire, expert ringers will think that you are a learner.  Announce that you can ring all sorts of Surprise and you will frighten a band of learners who will think that you are much too good to bother with them.  But if you say that you can ring Stedman, it seems to be a sort of happy medium.

It is not something that you can learn in five minutes, but persevere with it and you will really enjoy it I’m sure.  Here are lots of tips and instructions to help you to learn it without too much trouble.