On 19th December 2016, the first of St Mary’s new bells made the 19,450mm (about 64 feet) journey up the tower from the ground to the new belfry.  The third, appropriately the Taunton St Mary’s ringers’ bell, led the way and the remainder of the front 8 followed in remarkably quick succession, watched by a growing crowd of spectators and keen photographers. The opportunity was taken to recreate a 1955 photograph of the previous 10th lifting from the ground after it cracked and was recast. 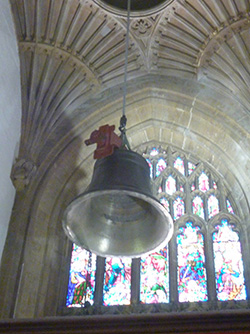 The tenor made a fine sight as it traversed past the West window and squeezed through the trapdoor complete with its headstock. 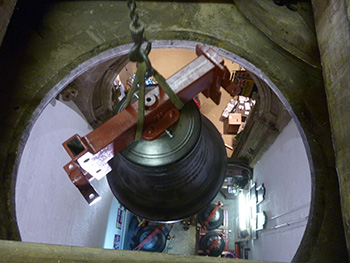 All the bells made it into their places just in time for Christmas, with the ninth being the last bell home.

Paul Mason from Taylors worked until Christmas Eve to wire up the carillon and, with Miles Quick, our organist, programming in “The First Noel”, the new carillon was able to ring out at the end of the Midnight Communion service early on Christmas morning.  What an amazing moment it was when the vicar opened the angel doors and as the congregation waited in silence, the chime of the carillon could be heard for the first time.  It was a surprisingly moving occasion and the bells sounded beautiful.

A quieter period has followed after Christmas as we wait for the concrete to dry but we have not been idle, for the electrician has been busy fitting new lights to illuminate the bells from above and below (no more fumbling about in the gloom to put muffles on for Remembrance Sunday as in the old belfry where there was the added zest of a 6 foot drop below!). Gone too are the rather ancient, flickering fluorescent tubes in the ringing room.  What an improvement that has made.

Smart new blue and white ropes have arrived and we look forward to the moment when they appear in their rightful place in the ringing room.  The bells are not hung in the same place as their previous equivalents.  The whole circle has moved round 90 degrees clockwise so that it is the 8th bell on your right as you come into the ringing room and the treble is on the opposite wall. 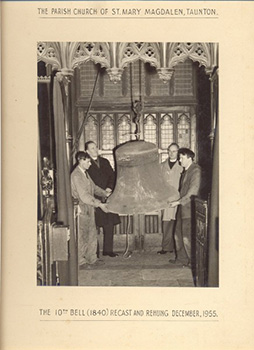 We are extremely grateful to Jonathan Banton from Milverton who has made us some beautiful new hooks and a spider for the bell ropes. 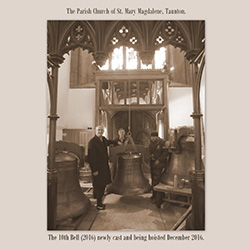 A competition has just been launched for Taunton schoolchildren to compose a new tune for the carillon.  The winning tunes will be added to all the old favourites. Our organist, Miles Quick, was enthused by the bells and a carillon on his visit to the foundry to watch the bells cast.  This is fortunate, for he will be the man to play in all the tunes into the digital memory.

A work party has been carefully cleaning the peal boards.  The oldest is dated 1/8/1896 and isn’t actually a peal board at all but a record of the first 120 rung by a local band.  This was not long after the bells were augmented to a 10 and clearly St Mary’s Guild were very proud of their efforts.

There is so much to look forward to in 2017 including the Dedication Service for the new bells on 19 March at 2.30 pm by the Bishop of Bath and Wells.