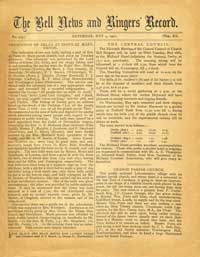 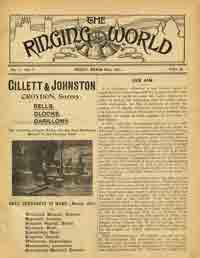 From 1871 Church Bells, a general church newspaper, contained a regular column devoted to bells and bell ringing, edited by the Revd H T Ellacombe. This column included reports of restorations and augmentations, peals and other ringing performances, instructional material and historical articles. Ellacombe was a strong advocate of belfry reform and the abolition of “prize ringing” and he made good use of his column for this.

On 1 February 1881 The Bell News and Ringers' Record (The Bell News) was launched as a monthly publication, edited by Harvey Reeves and supported by Jasper Snowdon. A year later it became a weekly paper with a high level of vitality. It was compulsive reading for ringers all over the country.

By 1895, however, the vitality of The Bell News was diminishing, and on 16 September 1896 William Bedwell, of Lewisham, launched Campanology in an attempt to introduce a brighter and more cheerful ringing magazine. Campanology was published weekly but only lasted until 10 March 1897. 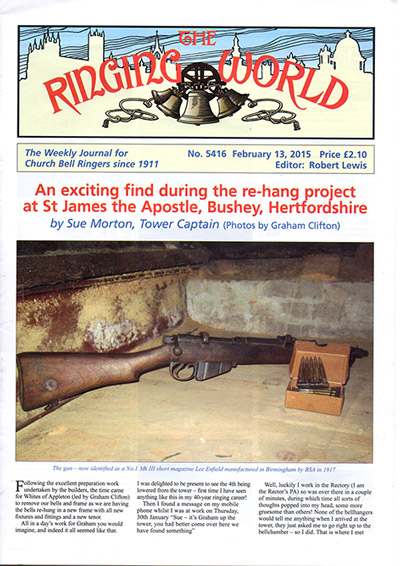 The Bell News continued to be published, but on 5 January 1907 another rival, The Bellringer, was launched with William C Hunt as Editor. It did not last long: five weekly editions were followed by four monthly editions, before it folded in June 1907.

By 1910 Harvey Reeves (the Editor of The Bell News) was in failing health and he died on 28 March 1911, just four days after the publication of the first edition of The Ringing World. The Bell News however carried on for another four years and its final edition was published on 25 December 1915.

The Ringing World was launched on 24th March, 1911, by John S Goldsmith of Guildford - over 100 years ago! Today the Ringing World continues, although it looks rather different to those early editions. Now there are good quality coloured pictures and it is on nice glossy paper. In addition to news items, there are articles about historical events, restorations, and outings. All Quarter Peals and Peals are published in the Ringing World, with footnotes explaining why they were rung. The letters pages always provide a lively debate about a wide variety of subjects. There are also pages teaching different aspects of ringing, and people achieving Learning The Ropes awards have their names published as well. A useful range of advertisements completes the magazine.

If you would like to read The Ringing World each week, it can be ordered from a newsagent. Alternatively, you can have an on-line copy for £42 per year, or a copy delivered by post for £69. (Only £65 if you pay by Direct Debit.) To order your copy now, contact the Ringing World office: 35A,High Street, Andover, Hampshire, SP10 1LJ, or telephone 01264 366 620.