A Right Royal (peculiar) Day Out!

by Roger Fox from Yeovil

For many people Saturday March 26th 2011, will be remembered for the TUC "cuts protest march"  through London. 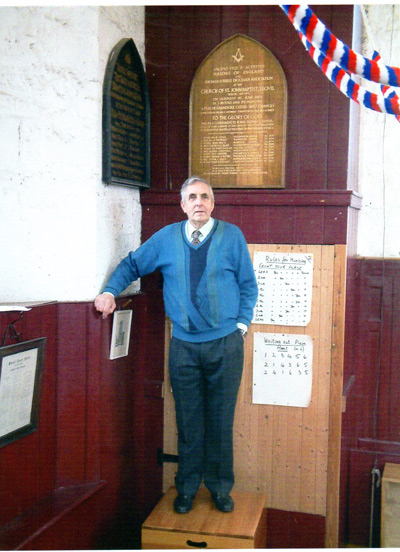 But that was not the only thing happening in the Capital that day!  My wife Jenny and I went to find out and I was able to fulfil a lifetime ambition.

The Bell Ringers' weekly newspaper, the "Ringing World" was celebrating 100 years of publication.  Now there are over 5000 towers where bells can be rung in the traditional English fashion, throughout the world, the majority of course being in the British Isles.  It is generally accepted that once a ringer is reasonably competent he or she will be welcome to ring in any of these towers.  A visitor at Sunday Service ringing or a Practice Night will most certainly be offered a chance to ring with the local band.  Indeed there are some ringing "anoraks" who will try to ring in all of them over their lifetime. However there are just a few towers, notably St Paul's Cathedral and Westminster Abbey, where you need to be particularly competent and know the right people to get in!  Not only that, Westminster Abbey, or, to give it the proper title ,the Collegiate Church of St Peter Westminster, is a Royal Peculiar.  This is a place of worship that falls directly under the jurisdiction of the Sovereign, not the bishop. I spoke to a few of the Abbey Company of Ringers and they said they were also filled with trepidation, as there is such a high standard always expected.

On the occasion of the Ringing World's Centenary a special Choral Evensong was held in the afternoon at the Abbey.  The Abbey was full of ringers and a few family members. About 2000 attended, and through an oversight only 800 copies of the service form were available.  The Dean in his sermon apologised for that and said hoped that the same thing didn't happen in a month's time!   He also thought many clergy would like to know how to get so many ringers at a service.  Exceptionally, permission had been granted for 30 ringers to join with the Abbey Company of Ringers in ringing after the service.  I was one of that lucky 30!  I would like you to think that it was on account of my reputation, but no.
Buying a ticket for the whole day's activities enabled you to participate in a draw to ring at either St Paul's or the Abbey, provided you were competent on ten bells and a good striker.  If you had rung before at either place, you could not select those bells to ring.  I had already rung a few times at St Paul's, so Westminster Abbey was my choice as to ring there  had always been an ambition.  Imagine my delight when an email told me I had been lucky in the draw.  As the day drew nearer, that delight turned to trepidation, because to ring there at the "Holy of Holies" would be an awesome experience!  The tradition at the Abbey is for the bells to be rung after services: only when the Sovereign is present are the bells rung before as well. Needless to say, today the ringing followed the service!

We had been advised that there were over 100 steps to the ringing room.  The 60 to ours in St John's is quite enough for me in one go - at my age!  I determined to count the steps as a small group of us were escorted up the tower, so as to pace myself.  I got to about 50 when the bells started to ring. Such a cascade of glorious sound came down the spiral stairway that concentration on counting was out of the question. Not only that I realised that they were ringing a method that I would have difficulty with - Cambridge Surprise Royal - which I had not rung for years.  That only added to the anxiety.  I need not have worried as they were offering Stedman Caters, and Grandsire Caters when we were let in to the ringing room.  To be on the safe side I asked if I could ring the tenor bell (only 30cwt, compared to St John's tenor of 40cwt).  I was politely told they wished one of their regulars to ring the tenor, and I was directed to bell no. 4 for a touch of Grandsire Caters which took about 7 minutes.  I did not disgrace myself - I was not told to "sort out my backstrokes"  as another visitor was!  I guess about 3 or 4 visiting ringers were slotted in to the Abbey's own band.  I can see why they were particular as to who rang where - this was about as public a performance as it could be, and they had their reputation to uphold.  All those ringers and tourists milling around outside - and all those policemen keeping the passing marchers in order -were bound to be lending a critical ear.  This was a wonderful experience being able to ring on the beautiful bells, and with some of the best ringers in the country.

Earlier in the day we called by St Saviour's church in Pimlico where a Young Ringers Trophy was being competed for.  Twelve teams of 8 youngsters  (all under 19) from all over England took part in the first such challenge. 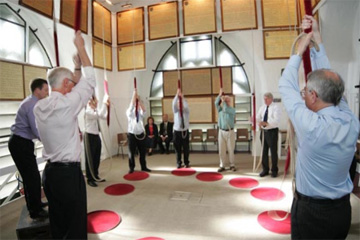 Many towers throughout London were open for visiting ringers. I met a number of ringers whom I knew from many parts of the country, the first I recognised was Phil Gay, who hailed from Crewkerne originally and who provided me with B and B in Keele when cycled Lands End to John O Groats in 1997.

I rang also at St Gabriel's  Pimlico (8 bells) and St Margaret's Westminster (10 bells)  which is more or less in the churchyard of the Abbey.  In the Dean's Yard next to Abbey there were two mini-rings were you could try your hand on miniature bells, and a refreshment tent.  The Whitechapel Bell foundry was open to visitors in the morning, but we decided not to try that as well, since there was a chance we might get tangled up with the marchers and miss my chance at the Abbey.

The Methodist Central Hall, just opposite the Abbey, following Evensong was the venue for tea and cakes (I missed these by being up the tower!), speeches and  the presentation of the Young Ringers Trophy. This was followed by a demonstration of change ringing on 24 hand-bells by 12 ringers, which had never before been done in public, and was a wonderful end to a great day.