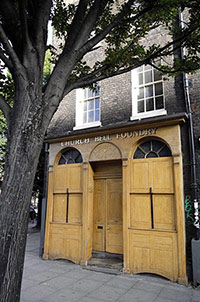 It is with deep regret that I announce the closure of Whitechapel Bell Foundry, the world’s most famous bell foundry and Britain’s oldest manufacturing company. Below you can read my interview with Alan Hughes, the last in a line of bell founders stretching back to 1420, who will retire next year at sixty-eight years old when the foundry closes in May 2017 and the building is sold – meanwhile, negotiations for the future ownership of the business are underway.

“We have made this decision with a heavy heart, but in response to the changing realities of running a business of this kind. The Bell Foundry in Whitechapel has changed hands many times, but it has always been a family business. My own family has owned the foundry since 1904, but other families have run the firm through its history, which stretches back to 1570. The business has been at its present site over two hundred and fifty years. So it is probably about time it moved once again. We hope that this move will provide an opportunity for the business to move forward in a new direction.” Alan & Kathryn Hughes

The rest of this article, including numerous photos, can be seen at www.spitalfieldslife.com . You will find it in the archive for December 2016.